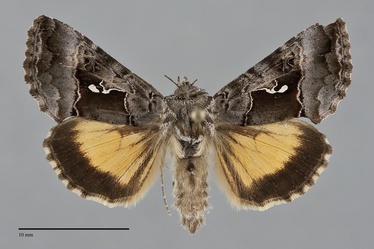 Syngrapha microgamma is a small (FW length 13 -14 mm) gray and black moth that flies in bogs in British Columbia in late spring and early summer. It has an ornate silver-white stigma on the mid-forewing and a yellow and black hindwing. The forewing is slightly pointed, has a scalloped fringe, and a small flange at the anal angle. The ground color is mottled gray, darkest on the costa in the median area and on the anterior two-thirds of the distal margin and lighter blue-gray in the anterior subterminal area and posterior terminal area. The median area posterior to the cubital vein is smooth velvety black or brown-black, slightly suffused with blue-gray toward the trailing margin. The stigma is fairly ornate, comprised of a basal squiggly V shape, thickest inferiorly, and a lateral thick oval or round projection that sometimes is a separate satellite spot. The basal, antemedial, and postmedial lines are gray to black, double, with gray, silvery filling, or light yellow filling. The basal line is dark gray or black, evident on the anterior two-thirds of the wing. The antemedial line is a dark gray bar on the costa and a black and silver incurved line below the cubital vein. The median line is a dark smudge near the reniform spot. The postmedial line is gray filled with light gray to cream near the costa and black filled with light yellow adjacent to the black median area. It is oriented perpendicular to the trailing margin and is irregular. The subterminal line is dark gray, nearly black on the anterior wing, irregular and nearly touching the outer margin below the apex and on the mid-wing near vein CuA1. The terminal line is pale gray medially with dark spots between the veins at the margin. The fringe is blue-gray with dark gray checkering.

A similar but smaller species, Syngrapha montana, is a predominantly eastern North American species that has been found in Saskatchewan and Alaska in the West and might conceivable occur in northern British Columbia. It is smaller than S. microgamma (FW length 12 -13 mm), tends to have a darker gray forewing with a subterminal line that is similar in strength across the entire wing rather than darker anteriorly, and has a thinner lateral extension of the stigma. Definitive identification requires examination of the genitalia as described in Lafontaine and Poole (1991).

Larva is smooth with only two pairs of abdominal prolegs.  The color is green, changing to reddish brown in older instars, with a very broad white lateral band.  It is illustrated by Lafontaine & Poole (1991).

This species is widely distributed across Canada in boreal spruce-fir forests and wet tundra, preferring acid bogs in British Columbia.

Syngrapha microgamma has been collected in northern and south-central British Columbia in the Northwest.

This is a Holarctic species that is found across the Northern Hemisphere.

This species is a foodplant specialist feeding on various Ericaceae such as huckleberries (Vaccinium spp.), but appears to particularly favor Labrador tea (Ledum groenlandicum) as a larval foodplant.

The summer flight period of S. microgamma is relatively short at any locality, usually occurring from late May to late July. It is both diurnal and nocturnal.