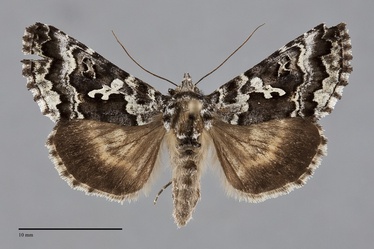 Syngrapha rectangula is a distinctive silver and black medium-sized moth (FW length 15 -17 mm) that flies in west-side and boreal forests during the summer. It has an ornate silver stigma on the mid-forewing. The forewing is slightly pointed with a weak flange at the anal angle. The ground color is silver gray, less often steel gray, with a slight greenish tint. The anterior basal area, entire median area, the distal subterminal area, and the apical terminal area are powdery charcoal gray, darkest near the stigma and the subterminal line. The mid- and posterior basal area, anteromedial subterminal area, and mid- and posterior terminal area are lightest. The stigma is greenish silver, ornate, comprised of a transverse line with two posterior and one anterior round projections. The lines are double, black, filled with light silver-gray. The basal line is evident near the costa. The antemedial line is usually complete, offset in the cell and undulating toward the base posterior to the cubital vein. The postmedial line is slightly irregular, sharply drawn basad on the costa and slightly oblique toward the base to the trailing margin. A black median line is usually present. The subterminal line is thin, silvery, preceded by a strong black shade. It is jagged with several strong teeth toward the outer margin. The terminal line is a series of black lines between veins. The fringe is strongly checkered silver gray and black. The orbicular spot is black filled with silver-gray, round, partially fused to the medial stigma in some specimens. The reniform spot is thin, silver with adjacent ill-defined black, figure-eight-shaped but often incomplete anteriorly or posteriorly, and filled with the color of the adjacent median area or lighter gray with dark gray at the anterior end and black at the posterior end. The hindwing is gray-brown with dark gray basal suffusion, and ill-defined gray marginal band, and faintly darker veins, discal spot, and postmedial line. The hindwing fringe is white with a tan and gray base and gray checkering. The head and thorax are silver-gray and black with tan tufts of long scales on the posterior thorax. Additional dark gray tufts arise from several abdominal segments. The male antenna is filiform.

This species is easily identified by its greenish silver and black forewing that gives the impression of drops of metal on a black background. It is unlikely to be confused with any other moth in the Pacific Northwest.

Larva is smooth with only two pairs of abdominal prolegs.  The color is green with broad white dorsal and lateral stripes.  It is illustrated by Miller & Hammond (2003).

This species occurs in cool, moist coniferous forests.  In our region, it is common to abundant in low elevation rainforests of the Coast Range and along the west slope of the Cascades, but is rare at higher elevations in the mountains. It occurs in boreal forests in the northern parts of our region.

Syngrapha rectangula is widely distributed in British Columbia. The range extends south to western Montana and northern Idaho in the Rocky Mountain region, and to central Oregon west of the Cascades.

This species has a disjunct distribution in North America. The western populations are confined to the Northwest and northwestern California. The eastern populations occur in two areas: boreal forest from northern Minnesota and western Ontario to Newfoundland and New York, and in the Appalachian Mountains in Tennessee, Virginia, and the Carolinas.

In the Pacific Northwest, this species appears to be a foodplant specialist feeding primarily on Douglas fir (Pseudotsuga menziesii) and western hemlock (Tsuga heterophylla) in the Pinaceae.

The flight period of S. rectangula is the summer. Records from our region span late June to early September but are most common from late July to mid-August. This species is nocturnal and comes to lights.