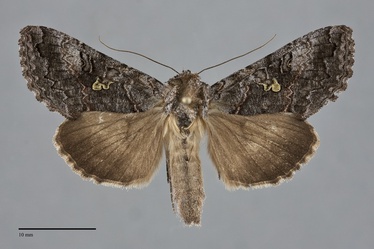 Syngrapha viridisigma is a mottled gray medium-sized moth (FW length 18–21 mm) that flies in forests throughout most of the Northwest during the summer. It has a green stigma and a forewing with a pointed apex, a slightly scalloped fringe, and a prominent flange at the anal angle. The color is mottled steel-gray with speckling of darker scales that is least prominent on the anterior wing distal to the reniform spot. The median area is usually darker gray. An ornate bright green stigma is present on the mid-wing. The basal, antemedial, and postmedial lines are dark gray, double and filled with the ground color. The basal line is evident on the anterior wing. The antemedial line is irregular from the costa across the cell, offset on the the cubital vein and strongly oblique toward the base from this vein to the trailing margin. The median line is diffuse, darkest anterior to the stigma. The postmedial line is faint anterior to the cubital vein, sometimes finely waved, strongly drawn toward the base on the costa, smoothly outwardly convex and inwardly convex from the costa to the fold, slightly bent toward the trailing margin in the fold. The subterminal line is dark gray, jaggedly irregular with several teeth on the mid-wing. The terminal line is faint, scalloped near the edge of the wing. The fringe is gray, weakly scalloped. The orbicular and reniform spots are thin and pale gray surrounded by darker gray. The orbicular spot is an irregularly square. The reniform spot is weakly hourglass-shaped and slightly tilted toward the apex. The hindwing is warm gray-tan, with a slightly darker gray outer margin and veins. The hindwing fringe is pale whitish gray with a yellow-tan and gray slightly checkered base. The head and thorax are steel gray with dark transverse bands on the distal collar. Loose tufts are present on the posterior thorax and several dorsal abdominal segments. The male antenna is filiform.

This species and Syngrapha selecta are the only plusiine species with greenish stigmas. Syngrapha selecta is a very rare moth that has only been encountered in the Skeena River drainage of west-central British Columbia. Is smaller than S. viridisigma (FW lenght 17–19 mm) and has a lighter hindwing with a distinct darker marginal band. In most of the Pacific Northwest S. viridisigma is most likely to be confused with Syngrapha celsa, a widespread and common species with a gray forewing with a yellowish stigma. In addition to the difference in color of the stigmas these species can usually be distinguished by size (FW length of S. celsa = 16–19 mm) and the hindwing color, lighter with a distinct darker marginal band in S. celsa.

This species is widely distributed in cool, moist coniferous forests across Canada.  It is usually uncommon to rare.  It does not appear to be evenly distributed across forest landscapes, but occurs in sporadic local colonies where it is sometimes frequent.  The species occupies both coastal rainforests at low elevations west of the Cascades, and high elevation subalpine forests in the mountains.

Syngrapha viridisigma is widespread in boreal and montane forests in our region. It occurs in southern British Columbia and adjacent northern Washington. The range extends to southern Oregon in the western  part of the region. It is found in the Coast Range, Cascade Range, and Siskiyou Mountains in western Oregon.

This species is one of the most widespread Syngrapha species in North America, occuring across the Continent in boreal and subarctic forests from Yukon Territory to Labrador. The range extends to southern Oregon along the Pacific Coast, eastern Arizona and northern New Mexico in the Rocky Mountains, and the Great Lakes states and New England in the East.

The flight period of S. viridisigma is the summer. It has been collected from early July to early September in our region. It is nocturnal and comes to lights.