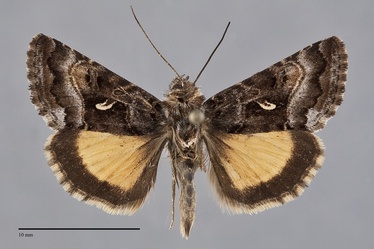 Syngrapha alticola is a small (FW length 12 - 13 mm) day-flying mottled gray-brown moth that flies in alpine meadows in British Columbia, northern Washington, and western Montana during the summer. It has a short, looped stigma and a yellow and black hindwing. The forewing is relatively short for the genus, with a slight flange at the anal angle. The color appears mottled brown, darkest basal to the reniform spot and the lower postmedial line. The wing beyond the postmedial line is lighter and grayer, except for the brown-black subterminal line and a shade preceding it. The color is lightest in the median area lateral to the reniform spot, in the medial subterminal area, and in the terminal area near the anal angle. The median area below the cell is smooth dark gray-brown, darkest near the stigma. The white stigma is a fairly short and blunt hairpin loop, thickest at the end of the loop. The basal, antemedial, and postmedial lines are dark brown, double, filled with brown to light gray-brown that is lightest in the posterior antemedial line and in the postmedial line. The basal line is short and inconspicuous. The antemedial line is oblique across the costa, interrupted by the cell, and strongly incurved below the cubital vein. The dark brown median line is visible on the lower median area and near the costa. The postmedial line appears pale, is smoothly excurved below the costa and nearly straight or slightly inwardly concave across the rest of the wing, slightly oblique toward the base. The dark subterminal line is very uneven, approaching the costa opposite the cell and on the mid-wing near vein CuA1. The terminal line is pale gray-brown with dark spots between the veins. The fringe is moderately checkered gray-brown and brown, paler gray near the anal angle. The orbicular spot is pale brown, faint, round to oval. The reniform spot is thin and pale, an upright bar or hourglass-shape, often incomplete at the anterior and posterior ends, surrounded by ill-defined dark brown and filled with the ground color. The hindwing is bright yellow with gray basal and inner margin suffusion and a well-defined dark gray to black marginal band. The hindwing fringe usually has a white to pale yellow edge lightly checkered with gray and an ochre base and thick gray median line.

This species is most likely to be confused with Syngrapha ignea, a slightly larger species with which it flies above timberline. It is less gray than S. alticola with a warm brown median area and a longer stigma. Its distal forewing is less mottled, with a smoother subterminal line and lesser contrast between the subterminal and terminal areas. Structurally the foretibia of S. ignea has spines on it which are absent in all other Syngrapha species including S. alticola. Syngrapha microgamma, an uncommon species that occurs in British Columbia, could potentially be mistaken for S. alticola but is gray and black rather than brownish. Its stigma is more ornate than that of S. alticola, with a rounded lateral projection or an adjacent satellite spot.

This species is widely distributed on arctic and alpine tundra. It prefers wet alpine meadows near streams.

This species is widespread in the continental portions of arctic and subarctic North America, extending from northern Alaska across Canada to Labrador and Newfoundland. The range extends south in the mountains of the West, reaching south to Colorado in the Rocky Mountains. A seemingly isolated population occurs in the high Sierra Nevada of California.

This species is strictly diurnal and visits flowers. The flight period is the summer, usually July and August.