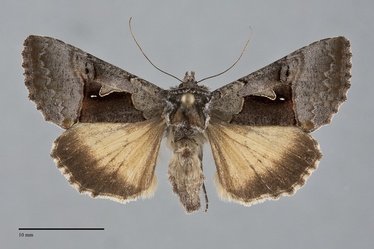 Syngrapha diasema is a medium-sized moth (FW 17 - 19 mm) that flies in northern British Columbia during the summer. It has a finely speckled violet-gray and black forewing with a thin hook-shaped stigma that often has a lateral extension or satellite spot, and a light buff and black hindwing. The forewing has a slightly pointed apex, a scalloped outer margin, and a small rust and buff colored flange at the anal angle. The color is even violet gray with fine dark transverse spots, greatest on the distal wing, and a slight rosy tint near the stigma and on the distal wing. The base and proximal costa are slightly lighter gray. The median area posterior to the stigma and cubital vein is velvety black with a small patch of rusty suffusion near the postmedial line in the fold. The stigma is silver-white, thin, horizontal, and open toward the costa with an asymmetrical V or fishhook shape. The posterolateral portion is variable, with or without a thin extension toward the postmedial line or a satellite line. The basal, antemedial, and postmedial lines are double, gray to gray and black, with light gray to slightly pink filling. The basal line is evident on the anterior wing. The antemedial line is a black spot on the costa, interrupted by the cell, and biconvex and strongly incurved below the cubital vein. The median line is a smoky dark shade near the costa. The postmedial line is faint and excurved below the costa, then smoothly concave inward across the rest of the wing. The subterminal line is very faint or absent, as well as serrate and pale gray, preceded by a faintly darker shade. The terminal line is absent or a series of small pale spots between the veins. The fringe is weakly gray. The orbicular spot is very faint or absent. The reniform spot is a narrow bar or hourglass-shape, thin, light tan irregularly surrounded by diffuse black lines on the inner and outer sides. The hindwing is buff tan with mild gray basal suffusion, discal spot, and veins with traces of a postmedial line. A moderately well-defined dark gray marginal band is present. The hindwing fringe is pale buff with dark gray checkering. The head and collar are gray with darker transverse barring on the collar. Dark gray tufts are present on the thorax and on several abdominal segments. The male antenna is filiform.

This species is most likely to be confused with Syngrapha borea in its northerly range, but might also occur with Syngrapha orophila. Both of these species have similar forewing markings, including thin silver-white stigmas, but their hindwings are much brighter yellow and lack any trace of the postmedial line. The forewing of S. borea is most like that of S. diasema. It tends to be smaller (FW length 13 -16 mm) and has red-brown thoracic tufts, gray in S. diasema. Syngrapha orophila usually lacks a lateral extension or satellite spot of the stigma as well as the small patch of colorful scales near the anal angle of the forewing that are present in S. diasema (as well as S. borea).

This species is widely distributed in arctic shrub tundra across the northern regions of both Eurasia and North America, extending southward in alpine habitats near timberline in the mountains.

This species has been reported to occur in North America (Troubridge and Lafontaine: Noctuoidea of Western Canada ). No specimens have been examined by the authors of the Pacific Northwest Moths website, but its occurrence in the province is highly likely given the proximity of the known range in western Alberta and Yukon Territory.

This species is Holarctic and occurs in the subarctic from Fennoscandia across northern Asia and North America. The New World populations are distributed from Alaska across the subarctic continent to northern Quebec and Labrador. A seemingly disjunct population occurs in the Rocky Mountains of western Alberta.

This species appears to be a foodplant specialist feeding on dwarf birch (Betula nana) in the Betulaceae on arctic shrub tundra, but it may also feed on dwarf huckleberries (Vaccinium spp.) in the Ericaceae.

This species flies from mid-July to mid-August across its range (Lafontaine & Poole 1991). The flight habits are not known to us, but it is possible that it flies both during the day and night.