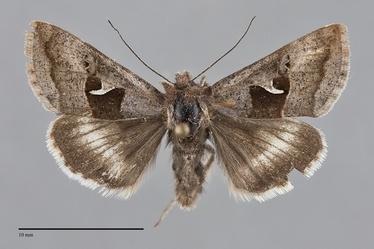 Syngrapha parilis, the smallest species of Syngrapha (FW length 11 - 14 mm), is a day-flying northerly species that flies over alpine tundra in northern British Columbia during the summer. It has a silver stigma on the mid-forewing and a dark gray and white hindwing. The forewing has a slightly pointed apex and is nearly uniform powdery gray. The costa and apex are slightly darker. The median area posterior to the cubital vein and stigma is uniform velvety blackish brown. The silver-white stigma is curved with a basal V and a thin pointed lateral spur. The basal line is warm brown and pale gray, evident posterior to the cell, perpendicular to the cubital vein at its origin and incurved toward the base toward the trailing margin. The postmedial line is gray, double with pale filling anterior to the cubital vein and similar to the antemedial line posterior to this vein. It is smoothly excurved below the costa, slightly angled on the cubital vein, and straight at a slight inward oblique angle below the cell. The subterminal line is gray, undulating. A gray terminal line is present at the base of the weakly checkered light gray and gray fringe. The reniform spot is thin and pale surrounded on the outside and inside by an irregular black line. Other lines and spots are absent. The hindwing groud color is white, with heavy dark gray suffusion basal to the postmedial line, powdery veins, and a relatively thin marginal band that has an ill-defined medial border. The head and collar are gray-brown and the rest of the thorax is gray. The male antenna is filiform.

This species is easily identified by the combination of a silver stigma on the forewing with a gray and white hindwing. It is the only species in the subfamily Plusiinae with white hindwing color.

This species flies over arctic tundra across the northern regions, extending southward in alpine meadows in the northern Rocky Mountains.

Syngrapha parilis is limited to northern British Columbia in our region. It is probably fairly widespread in the inaccessible mountains of this area.

This species is predominantly an arctic and subarctic insect and is found around the world at high latitudes, including on Greenland and Ellesmere Island in the Canadian Arctic Archipelago. The range extends across northern Eurasia to Scandinavia. In North America it is found across the North from Alaska to Greenland. The range extends south along the shores of Hudson Bay and in the Rocky Mountains to western Alberta.

This species is a foodplant specialist feeding on dwarf willows (Salix spp.) in the Salicaceae on arctic shrub tundra.

Adults fly during the summer, usually in July and August. They are strictly diurnal and visit flowers.