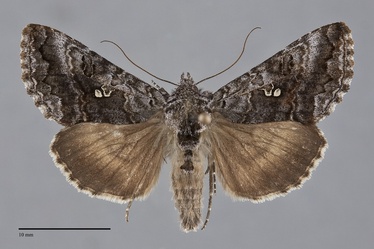 Syngrapha interrogationis is a rarely collected smoothly mottled-gray medium-sized moth (FW length 16–17 mm) that flies in northern British Columbia during the summer. It has a thin silver stigma on the mid-forewing. The forewing has a slightly pointed apex, weak scalloping of the fringe, and a small flange at the anal angle. It is mottled gray, with ill-defined darker gray on the median area posterior to the cell, as a dark shade medial to the subterminal line, and in the terminal area near the apex. The gray color is lightest in the subterminal area opposite the cell and in the terminal area near the anal angle. The silvery stigma has a thin sinuous basal "V" and a separate round satellite spot, sometimes fused into a single mark or lacking the spot. The basal, antemedial, and postmedial lines are gray, double, with filling of the ground color or slightly lighter gray. The basal line is evident on the anterior two-thirds of the wing. The antemedial line is evident on the costa, absent through the cell, and wavy below the cubital vein where it slightly incurved above the trailing margin. A dark diffuse median line is present. The postmedial line is finely scalloped, sharply turned toward the base on the costa, nearly straight at a slight angle toward the base across the rest of the wing. The subterminal line is black preceded by a dark gray shade, moderately irregular with several sharp bends, nearly reaching the outer margin below the apex and at a W-mark near vein CuA1. The terminal line is a series of medial pale and lateral dark gray marks between veins. The fringe is checkered light and dark gray. The orbicular spot is a diffuse pale circle with an inner dark ring and central light gray filling. The reniform spot is pale gray, thin, hourglass-shaped with ill-defined black outside the medial and lateral segments, filled with the gray of the adjacent wing and black inferiorly. The hindwing is light to medium-dark gray-tan with light basal suffusion and darker gray veins, discal spot, postmedial line, and ill-defined marginal band. The hindwing fringe has a pale whitish tan edge and ochre and checkered gray base. The head and thorax are gray with darker transverse bands on the collar and tegulae. The thorax bears long gray tufts, with additional dorsal tufts on several abdominal segments. The male antenna is filiform.

This species is one of several similar gray Syngrapha species with silvery stigmas and tan and gray hindwings that occur in northern British Columbia. Syngrapha interrogationis can be distinguished from Syngrapha alias by its thinner and less ornate stigma and less mottled and lighter gray forewing color, thicker stigma with round anterior and posterior projections and mottled darker gray forewing in S. alias. Syngrapha octoscripta has a rusty-brown patch below the tip of its stigma which is lacking in S. interrogationis. Syngrapha celsa might occur with S. interrogationis at the northern limit of its range and has a similar forewing color and pattern. S. celsa tends to have darker gray on the median area that extends to the anal portion of the terminal area, limited to the subterminal area in S. interrogationis, and its stigma has a distinct light yellow color rather than silver-white. Syngrapha surena has a very simple thin broadly V-shaped stigma that separates the medial area into anterior light silver gray and posterior dark gray sections.

This species flies in boreal, montane, and subarctic forests across Canada. It is associated with forested bogs in western Alberta.

This is a Holarctic species that is most widely distributed in the Old World. It occurs from Scandinavia and the mountains of central Europe east across Asia. In North America it is predominantly a species of the northern boreal zone and the subarctic. It is found from Alaska to Labrador near the limit of trees. The range extends south to the Rocky Mountains of Alberta.

This species feeds on arctic tundra shrubs including dwarf huckleberries (Vaccinium spp.) in the Ericaceae and dwarf birch (Betula nana) in the Betulaceae.

This species flies during late summer, usually from late July to September. It is nocturnal and comes to lights.