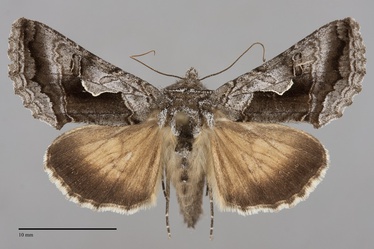 Syngrapha surena is a rare medium-size moth (FW 15–18 mm) that occurs in central British Columbia during mid-summer. It has a pale silver-gray anterior and dark gray posterior forewing separated by a thin broadly V-shaped stigma. The forewing shape is similar to those of other Syngrapha species, with a slightly scalloped outer margin and slight point at the distal posterior margin near the anal angle. The color is two-toned: mottled light silvery gray over most of the forewing, and darker gray in the medial area posterior to the stigma and basal to the subterminal line. The most prominent mark is the linear thin silvery stigma, joined medially to the posterior two-thirds of the antemedial line. The stigma shape is characteristic, lacking thick segments or an adjacent dot. The basal and postmedial lines are dark gray with lighter filling, but generally inconspicuous compared to adjacent mottling and dark areas. The subterminal line is jagged, evident mostly as the transition between the preceding dark gray shade and the lighter gray terminal area. The fringe is weakly checkered dark and lighter gray. The hindwing is fuscous-tan with a broad darker terminal shade over the distal third, lacking dark veins or discal spot. The hindwing fringe is two toned, gray with a light base.

This rare species can usually be recognized by the bicolored medial area with the thin broadly V-shaped stigma separating the lighter anterior and darker posterior portions. The stigma shape is unique. Similar species in the genus have a satellite spot at the lateral margin of the stigma, more mottled light gray portions of the forewing, or red-brown spots.

This moth is rare throughout its range. It is most commonly associated with sphagnum bogs; however, the few records from British Columbia are from mixed forest with spruce and aspen.

Syngrapha surena has been found several times at Sheridan Lake south-west of 100-mile House in the Cariboo Region of central British Columbia, where it was discovered as new to the region by Dave Holden. It is probably more widespread in the central and northern part of the province.

This species is found across boreal North America from Newfoundland and Labrador to central British Columbia. It is almost exclusively a Canadian moth, with a single record from northern Maine shown in Poole and Lafontaine (1991).

The larva is reported to feed on blueberries (Vaccininium spp.) (Lafontaine & Poole 1991)

Adults are on the wing from mid-July to mid-August. All of the Pacific Northwest records are from mid- to late July. This moth is nocturnal and is attracted to lights.