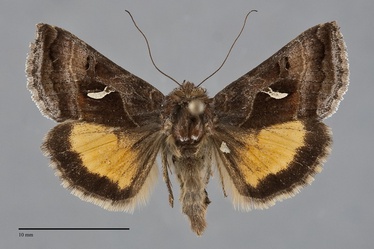 Syngrapha ignea is a small (FW length 13 - 15) day-flying alpine moth that flies in British Columbia and northern Washington during the summer. It has a mottled brown forewing with a velvety warm brown median area below a long curved white stigma. Its hindwing is yellow and black. The forewing is slightly pointed with a slight flange at the anal angle. The ground color is gray-brown, lightest on both sides of the postmedial line distal to the reniform spot and with a uniform brown shade preceding the subterminal line. The median area below the cubital vein and its branch CuA1 are velvety warm brown, slightly rusty near the postmedial line in the fold. The creamy white stigma is a bent hairpin-shaped loop, with the limbs often fused into a single slightly pointed lateral end. The lines are brown, double filled with light gray-brown, tan, or slightly yellow scales. The basal line is oblique inward from the costal margin. The antemedial line is strongly oblique outward on the costa, interrupted across the cell, and oblique and curved toward the base below the cubital vein. The median line is a dark shade near the costa. The postmedial line is smoothly undulating, excurved below the costa and then slightly oblique toward the base to the trailing margin. The subterminal line is slightly irregular, pale but most evident because of the dark shade, nearly touching the outer margin below the apex and forming a weak W-mark around vein CuA1. The orbicular spot is pale, absent or very faint. The reniform spot is a narrow upright oval or weak hourglass-shape, pale and surrounded by smudged black lines on the proximal and distal sides. The hindwing is dark yellow with gray basal suffusion and a thin dark bray to black marginal band. The hindwing fringe is variable, usually gray anteriorly and pale buff to yellow with a lined yellow and gray base elsewhere. The head and thorax are chestnut brown with thin pale gray edges on the collar, tegulae, and thoracic tufts. Additional strong dorsal tufts are present on several of the abdominal segments. The eyes are slightly reduced in size. The male antenna is filiform. The tibiae of all of the legs bear spines in S. ignea, a unique character amongst North American Syngrapha species.

This species can usually be identified by its small size, warm brown forewing, looped stigma, and bright yellow and black hindwing. It is most likely to be confused with Syngrapha alticola, a less widespread and common alpine moth that flies with it in British Columbia and northern Washington. S. alticola is more gray-brown and more mottled than S. ignea, especially on the distal forewing where its subterminal line is irregular with a large contrast between the preceding shade and the paler terminal area. The stigma in S. alticola is much shorter, often a short U rather than a long loop. It also lacks foretibial spines.

Larva is smooth with only two pairs of abdominal prolegs.  The color is green, changing to dark reddish brown in later instars, with thin white dorsal lines and a broader white lateral line.  It is illustrated by Lafontaine & Poole (1991).

This species is common in open alpine and subalpine meadows at high elevations throughout the Rocky Mountain region. It is most commonly found near streams.

Syngrapha ignea is found in mountains throughout British Columbia, including the far northern part. It has also been collected in eastern Idaho, and in the Cascade Range in northern Washington, and in southern Oregon.

This species occurs in two separate areas in North America, the western Arctic and mountains and in Labrador and adjacent Quebec. The western populations occur from Alaska, Yukon Territory, and Northwest Territories south through the Rocky Mountains to Colorado, New Mexico, and Utah. It also occurs in the high Sierra Nevada.

This species appears to be a foodplant specialist feeding on dwarf huckleberries (Vaccinium spp.) in the Ericaceae and dwarf willows (Salix spp.) in the Salicaceae within subalpine to alpine habitats.

Adults are diurnal and nectar on flowers during the day. It has been collected on a small-flowered species of Penstemon in Yukon Territory and Washington. The flight season is summer, most commonly in July.