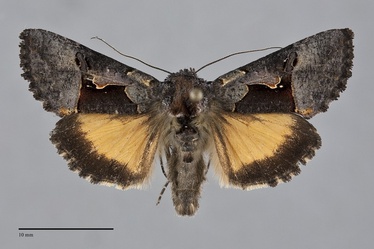 Syngrapha borea is a small to medium-sized moth (FW 13 - 16 mm) that flies in mountain and boreal forests in British Columbia and northern Washington during the summer. It has a gray and black forewing with a yellow spot near the anal angle, a thin hook-shaped stigma with either a thin, lateral extension from the lower end or an adjacent spot. Its hindwing is yellow and black. The forewing has a slightly pointed apex, a slightly scalloped outer margin, and a small flange at the anal angle. The color is finely speckled dark gray, lightest at the base, lateral to the reniform spot and in the proximal subterminal area, and darkest near the costa in the median area and toward the outer margin. A small patch of golden-yellow is present near the anal angle above the flange, and a few yellow scales are often present on the costa between the basal and antemedial lines. The median area posterior to the stigma and cubital vein is velvety brown black with a small area of warm rusty suffusion at the postmedial line in the fold. The stigma is silver-white, thin, horizontal, and open toward the costa with an asymmetrical V or fishhook shape. The inferolateral stigma is variable, with or without a thin linear extension toward the outer margin or a separate small dot or line. The basal, antemedial, and postmedial lines are black and tan to yellow. The basal line is evident on the anterior wing. The antemedial line is a black line on the costa, interrupted by the cell, and smooth, strongly oblique toward the base, and incurved below the cubital vein. The postmedial line is very faint on the costa and stronger on the posterior wing, smoothly concave inward. The subterminal line is barely evident or completely absent, a serrate transition between slightly darker gray in the distal subterminal area and slightly lighter gray in the terminal area. The terminal line is absent or a series of tan spots between veins. The fringe is slightly brownish gray. The orbicular spot is absent or faint. The reniform spot is hourglass-shaped, thin and gray irregularly surrounded by diffuse black lines on the median and lateral sides. The hindwing is ochre-yellow with a small amount of gray basal suffusion, discal spot, and a few veins. A moderately well-defined dark gray to black marginal band is present. The hindwing fringe is dark gray anteriorly, gradually lightening to white at the anal angle. The head, collar, and tegulae are dark gray with transverse lines on the collar. The median thorax has long tufts of red-brown scales. Additional dark gray and red-brown tufts are present on several abdominal segments. The male antenna is filiform.

This species flies in moist boreal and subalpine conifer forests of spruce and fir. It is a common and widespread species at high elevations within the subalpine zone.

Syngrapha borea is found throughout British Columbia and in the extreme northern portion of the Cascades in Washington.

Syngrapha occurs in northwestern North America as well as on the west coast of Greenland. The western population is distributed from central Alaska, Yukon Territory, and southern Northwest Territories to northern Washington and western Alberta. It has not been found along Hudson Bay or on the eastern North American continent.

No information is presently available regarding larval foodplants of this species, but closely related species feed on dwarf birch (Betula spp.) in the Betulaceae and dwarf huckleberries (Vaccinium spp.) in the Ericaceae.

The flight period of S. borea is the summer, usually from late June to early August. It is both nocturnal and diurnal. It is attracted to lights at night.