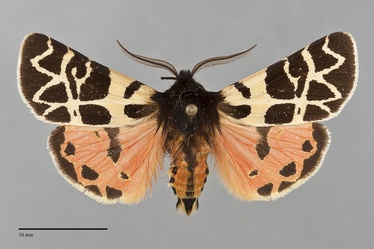 Apantesis behrii is an attractive fall-flying tiger moth from southwestern Oregon. It is a medium-sized moth (FW length 15–17 mm), slightly larger than A. nevadensis. The light markings on the forewing are light ochre yellow and the basal and antemedial lines are relatively wide, especially compared to the transverse lines on the distal forewing. The hindwing is orange-red with reduced size and number of spots and a thin marginal band. The antennae, head, and dorsal thorax are black. The abdomen matches the hindwings with several longitudinal black stripes typical of the genus.

This species can be recognized by its southwest Oregon locality, fall flight, light yellow and black forewing, and spotted orange-red hindwing. It is most similar to Apantesis nevadensis, which also flies in the fall. The yellow forewing with wide antemedial line is diagnostic of A. behrii. The ranges of these species approach each other without clear overlap in the Pacific Northwest.

This species appears to be very rare and locally distributed in northwestern California and southwestern Oregon.  The habitat is open oak woodland and dry prairie at low elevations, and open clear-cuts at higher elevations in the Siskiyou Mountains.

Apantesis behrii is restricted to southern Oregon in the Pacific Northwest. Most records are from the Siskiyou Mountains, with a single record from near the Klamath River east of the Cascade Mountains. A record of this moth from Portland is questionable.

This species is found in California south of our region where it has a patchy distribution. Records are clustered from the Klamath Mountains, the northern Coast Range, the northern Sierra Nevada, and the Transverse Ranges.

Larvae of this species have been collected on Lotus (Fabaceae) and Amsinckia (Boraginaceae) in Los Angeles County, California (Schmidt 2009). It is probably a general feeder on forbs and grasses like many species in the genus.

Pacific Northwest populations of this species have been collected in September. Males are nocturnal and come to light while females are diurnal and are not captured in light traps (Schmidt 2009).