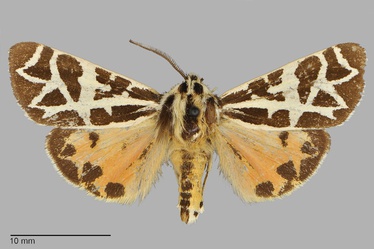 Apantesis eureka is a poorly known species recently described from only four specimens. It is a medium-sized arctiid moth (FW length 16–18 mm) that is nearly identical to Apantesis nevadensis. Like this species, E. eureka has typical black and white forewing and red and black hindwing, but differs in having small eyes, narrower antennal branches, and a squared-off blunt-tipped valve of the male genitalia. The holotype has slightly more white along the cubital vein and more orange-red hindwing color than is typical for A. nevadensis. Importantly, its flight period is during spring, not late summer and fall like that of A. nevadensis.

The habitat of this species is unknown.

The occurrence of Apantesis eureka in the Pacific Northwest is speculative based on an unlabeled specimen. This single papered specimen without data was given to Doug Ferguson by Jim Manning, a butterfly collector from Boise, Idaho. Although the exact locality is uncertain Ferguson & Schmidt (2007) surmised that this specimen came from the vicinity of Boise, Ada County, Idaho.

This species is known with certainty only from Eureka, Utah. All but one of the type series were collected there by Tom Spalding.

The adults of Apantesis eureka are likely to be diurnal based on its small eyes and the fact that one of the type series was collected by a butterfly collector. The collection dates from Eureka, Utah are from 20 April and 9 May. It might fly slightly later in the spring in Idaho.