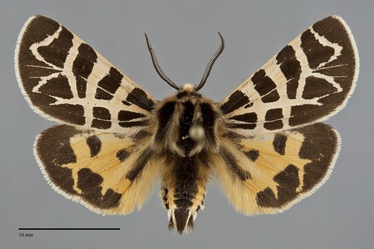 Apantesis ornata is a very common, variably colored tiger moth found in late spring and early summer. It is medium-sized (FW length 16–20 mm). The forewing appears black, typically with a net-like pattern of extensive yellowish or rosy off-white transverse lines and thinner pale veins. The hindwing color is variable from yellow-orange, orange, to orange-red, rarely entirely black. The hindwing is heavily marked with black, including the basal wing, multiple spots, and an irregular marginal band. These are often fused to each other, especially near the wing margin.

This species demonstrates geographic variation in the Pacific Northwest. Moths from southwestern Oregon are slightly larger and more brightly colored than those from most other populations and have reduced pale scaling on the veins. Specimens from southwestern Washington are small with well-developed transverse lines and pale veins and have small eyes. These resemble A. edwardsii but the hindwing marginal spots are fused to the marginal band (separate in specimens illustrated by Schmidt (2009) and they lack pale scales at the base of the antenna present in that species.

Apantesis ornata is unlikely to be confused with most other Grammia species because of its early flight season. It is most similar to the very rare A. complicata and A. edwardsii, which both have restricted ranges in the Pacific Northwest. Differences between these species and A. ornata are discussed under each of the other species.

Larva is covered with long black hairs dorsally and laterally, but has red hairs ventrally, and has a yellow-orange middorsal line.  It is illustrated by Miller & Hammond (2003).

Apantesis ornata occurs in the dry interior in the northern part of its range, occurring in southern British Columbia and eastern Washington to western Montana. It is found west of the mountains south of Puget Sound and is common throughout Oregon. The distribution appears to be limited in southern Idaho with records confined to the southeastern corner of the state.

This species occurs in western North America west of the Rocky Mountains. Outside of the Pacific Northwest it is found in all but the most southern parts of California, Nevada, and Utah.

This species is a generalist that feeds on a wide variety of herbaceous vegetation.

Apantesis ornata is single brooded and flies from late spring through July, earliest at lower elevations. Males are nocturnal and are common in light traps whereas females are never collected at light.