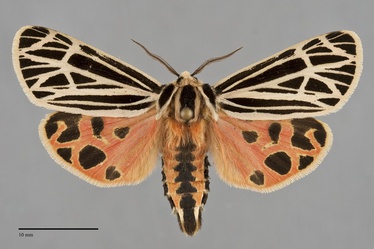 Apantesis virgo is a relatively large (FW length 20–27 mm), white, black, and red moth that is restricted to the eastern parts of our region. The forewing is black with prominent off-white veins and postmedial and subterminal region transverse lines. The hindwing is bright orange-red with pale rimmed black spots medial to the discal spot in addition to in the marginal region. A patchy marginal band is also present. As in other Apantesis species the fringe is pale, the thorax appears longitudinaly streaked black and white, and the abdomen is lined red and black.  The male antenna is black, bipectinate.

This is a relatively common eastern species that barely enters the Pacific Northwest in the Rocky Mountain region.  It usually occurs in open moist meadow habitats and in open hardwood forests further east.

Apantesis virgo is found only in extreme eastern British Columbia in our region, both in the southeastern corner of the province and in the Peace River region. A record from southern Vancouver Island might be an error.

This species is common and widespread in temperate eastern North America where it occurs from the Gaspe Peninsula of Quebec south to northern Florida. The range extends west in a roughly triangular distribution to Alberta where it occurs widely except in the far northern part of the province.

This species has been collected in late spring and July in our region. According to Schmidt (2009) it usually peaks two to three weeks earlier than A. parthenice, but fresh specimens of these species have been collected together in the Peace River District, British Columbia. Apantesis virgo is nocturnal and comes to lights.