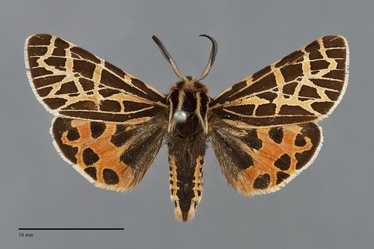 Apantesis edwardsii is an extremely rare, poorly known, and small tiger moth (FW length 13–15 mm). It resembles closely red forms of Apantesis ornata. Like these, the typical form from vicinity of San Francisco, California has a black forewing with off-white transverse lines and veins and a black-spotted orange-red hindwing. It differs in having slightly more narrow wings, pale buff bases of the antennae, and a reduced eye-size typical of many strictly day-flying moths. The single Pacific Northwest specimen differs from the typical form in that is lacks pale veins (Schmidt 2009).

The habitat of this moth in the Pacific Northwest is unknown.

A single male specimen assigned to this species by Chris Schmidt (2009) is known from Skookum Meadows, 8 miles east of Chemult, Klamath County, Oregon.

This species is only known from San Francisco, California outside of the Pacific Northwest.

The larva is unknown but is most likely a general feeder on low herbaceous plants.

The single male specimen from Klamath County was collected July 23.

Adults of Apantesis edwardsii are likely to be diurnal because of their reduced eye-size.