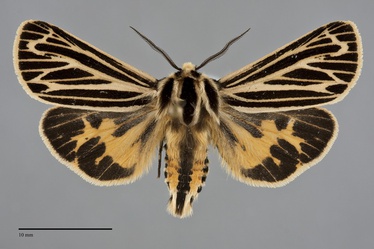 Apantesis virguncula is a medium-sized Apantesis (FW length 17–22 mm) that flies along the eastern border of the Pacific Northwest region during the summer. It has a streaky forewing and orange hindwing. The forewing is black with pale ochre veins. The transverse lines are limited to a strongly zigzagged subterminal line. The bright yellow-orange hindwing is marked by several black bars at the base, spots that are often fused to the marginal band, and a marginal band. The veins in the marginal area are often orange. The fringe of both wings is pale ochre. The head and thorax are pale ochre to light tan, with black lines on the collar, tegulae, and central thorax. The abdomen is orange with black stripes. The black antenna is bipectinate in males and biserrate in females.

This species is most similar to A. speciosa which occurs in northern British Columbia. A. speciosa has a reduced eye and more narrow antennae typical of day-flying moths. A. virguncula is also similar to A. obliterata,which has more pale transverse lines in the mid forewing than A. virguncula and the hindwing base lacks strong black marks.

Apantesis virguncula is one of several eastern Apantesis species that barely enters our region. The Pacific Northwest records are limited to southeastern British Columbia and southeastern Idaho.

This species has a roughly triangular distribution in North America. In the west it has been found from northeastern and western Alberta south to eastern Arizona. The north-south distribution is much smaller further east where it occurs in a narrow band encompassing the Great Lakes states. It is found from Nova Scotia to Pennsylvania along the Atlantic Coast. The range is mostly south and east of that of Apantesis speciosa.

Apantesis virguncula flies in summer with records from June and July in our region. It is nocturnal and comes to light, unlike its close relative A. speciosa.