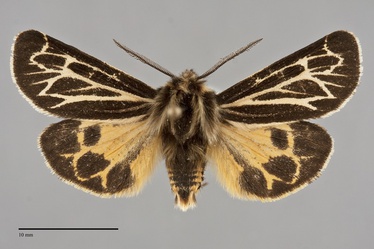 Apantesis obliterata is a medium-sized tiger moth (FW length 16 mm) that is only found in eastern British Columbia in our region. The forewing appears black with off-white veins and transverse lines. The pale veins on the posterior wing do not reach the fringe. The transverse pale areas include a few bars near the costal wing margin in addition to the more prominent subterminal region zigzag marking. The dorsal hindwing is orange with large black discal and submarginal spots, the latter often fused to a broad marginal band. The base of the hindwing lacks black spots.

This species is similar to several other Apantesis species with black and white forewings and orange and black hindwings. It can usually be distinguished by white scaling along the cubital vein distal to the W-shaped subterminal white line. Apantesis obliterata is most likely to be confused with Apantesis virgincula, which occurs in southeastern British Columbia in our region. Apantesis virgincula lacks the transverse pale lines other than in the subterminal region, the pale veins extend to the wing margin near the anal angle, and the basal hindwing is marked with black unlike those of A. obliterata. The general appearance of A. obliterata is also similar to Apantesis blakei, another Great Plains species that barely enters our region, but this species is smaller and has prominent pale transverse lines including in the antemedial region that A. obliterata lacks. Females of Apantesis margo have orange hindwings but lack transverse white markings other than the subcubital line.

This species is found in grasslands, preferring habitats with exposed soil such as eroded slopes (Schmidt 2009).

In our region Apantesis obliterata is only known from extreme southeastern Idaho and in northeastern British Columbia near the Peace River. There are numerous records of it from eastern Alberta.

Apantesis obliterata is Holarctic--in fact, it was once placed in the genus Holarctia, but this has since been revised, and it is now in the genus Apantesis. In the New World this species has been most commonly found in the Canadian Prairie provinces where it occurs from southern Manitoba to eastern British Columbia. Records extend to central Alaska near the Yukon Territory border and the Alberta-Northwest Territory in the north. Only a few records are known from the continental United States, including northeastern Utah and the Texas Panhandle.

No information is presently available regarding larval foodplants of this species, but it probably feeds on general herbaceous vegetation like related species.

Adults are nocturnal and come to light. They fly in late summer and early fall.