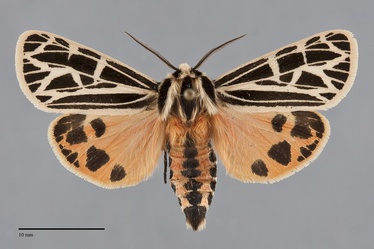 Apantesis parthenice is a medium-sized (FW length 17–19 mm) red hindwing species of Apantesis found in British Columbia and eastern Idaho in our region. The forewing is similar to that of Apantesis virgo, appearing black with off-white veins and transverse lines at and distal to the cell; however A. parthenice has a pale transverse line oriented perpendicular to the costa in the mid-cell that is lacking in A. virgo. The red hindwing has pale-rimmed black discal and marginal spots, lacking marks medial to the discal spot. The body and antennae are similar to those of most other Apantesis species.

This species can be distinguished from A. virgo and A. doris by the lack of black markings medial to the hindwing discal spot that are present in both other species. Apantesis doris also has an extra pale transverse line in the discal cell that A. parthenice lacks.

This is a relatively uncommon species in eastern North America that barely enters the Pacific Northwest, and is usually found in moist meadow and forest habitats at low elevations.

Apantesis parthenice has a disjunct distribution in the Pacific Northwest. In the north it occurs in British Columbia, both in the south-central and southeastern province and in the Peace River District. The southern distribution is in southeastern Idaho.

This species is widespread in North America, having the largest range of any Apantesis. It occurs from British Columbia to the St. Lawrence River region in the north, and from Utah and New Mexico to Georgia in the south.

Apantesis parthenice is single brooded. Adults have been collected from mid June to late August in the Pacific Northwest with most records from July. According to Schmidt (2009) this species flies a few weeks later than A. virgo where the two species occur together.