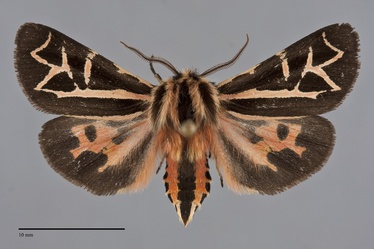 Apantesis williamsii is a variably colored, small to medium-sized (FW length 14–16 mm) Apantesis species that flies from eastern British Columbia to southern Idaho from late spring to late summer. It has stubby black forewings with limited pale lines and usually has a dark red hindwing. The pale forewing markings include incomplete median, postmedial, and subterminal lines and the transverse postcubital line which extends slightly distal to the subterminal line as a small sideways "Y" near the anal angle.  The hindwing ground color in most individuals is dark red, with occasional pale yellow-white or orange specimens. The hindwing black markings are variable but are typically fairly extensive, with black basal streaks, discal and marginal spots that are often fused to adjacent marginal black areas, and black anterior and posteromedial margins that are often fused to the marginal band. The light areas on the thorax are pale tan and the color of the abdomen is similar to the hindwing ground color. The antennae are variable in color from dark to pale, moderately bipectinate in males and biserrate in females.

Red hindwing Apantesis williamsii are distinctive in our region. Pale and orange hindwing individuals resemble A. elongata, but lack the pale cubital vein and small eye size found in that species. Apantesis williamsii is also similar to A. margo but the ranges of these species are not known to overlap in the Pacific Northwest since the latter species is only known from near the Peace River in British Columbia. Males of A. williamsii have longer antennal pectinations, the postcubital band of  A.williamsii extends distal to the subterminal band unlike that of A. margo, and A. williamsii is nocturnal occurs later in the year than A. margo which is diurnal and flies in the spring.

This species is often common at middle to high elevations in mountain meadows of the Rocky Mountain region. It also occurs in quaking aspen forests and dry coniferous forests, especially in areas with sandy soil (Schmidt 2009).

Apantesis williamsii is found in the eastern portion of the Pacific Northwest, most extensively in central and eastern Idaho. It also occurs in southeastern British Columbia.

This species has a wide distribution in North America. Most records are from near the north-south axis of the Cordillera, from western Nevada to southern New Mexico in the south to southern Northwest Territory in the north. It also occurs in the Sierra Nevada. It flies in the northern Great Plains as far south as Nebraska. The range is much narrower further east where it ranges north of the Great Lakes to northern Maine and New Brunswick.

This species has been reared on a variety of forbs (Schmidt 2009). It is probably a general feeder on herbaceous plants and grasses.

Apantesis williamsii has a long flight season in parts of its range. Most Pacific Northwest region records are from July and August. Adults are single brooded. Males are nocturnal and come readily to light. Like several other Apantesis species, females are never collected in light traps.