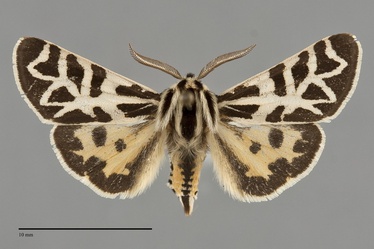 Apantesis blakei is a relatively small (FW length 10–14 mm) and pale diurnal Apantesis from the Great Plains that has been found once in southeastern Idaho as a larva. The forewing has broad transverse lines, with pale veins limited to the cubital vein and the anal vein near the wing base. The light orange hindwing is marked with black single medial spot, discal spot, and black medial and outer margin to which most of the marginal spots are fused. The thorax and abdomen are typical for the genus. The dorsal antennae are pale, widely pectinate in males and serrate in females.

This species occurs on grasslands. It has been collected near treeline in southwestern Alberta. It is diurnal, flying in late afternoon, and is rarely collected at lights (Schmidt 2009). The Idaho larva was found in open sage rangeland (N. Hampton, pers. comm. 2014).

This species is limited to southeastern Idaho in our region. It could potentially be found in southeastern British Columbia near the border with Alberta and in western Montana.

Apantesis blakei is a species of the Great Plains. The distribution extends from southeast British Columbia to southwestern Manitoba in the north to northern New Mexico and the Texas Panhandle in the south.

The larvae are polyphagous and feed on a number of grasses and forbs (Schmidt 2009).

The larvae can be injurious to wheat in the Great Plains (Byers 1988).