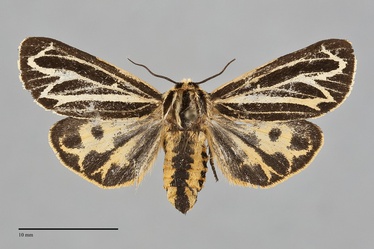 Apantesis speciosa is a northern Apantesis with predominantly longitudinal markings on the forewing and an orange and black hindwing, closely resembling Apantesis virgincula. It is a small to medium-sized moth (FW length 14–16 mm). The forewing is longitudinally streaked with light ochre on the veins with the transverse pale markings limited to the zigzag subterminal line. The hindwing is usually heavily marked with black, including the basal area, multiples spots, and a marginal band. The antennae are entirely black, moderately bipectinate in males and biserrate in females. The eyes are reduced in size compared to nocturnal species.

Apantesis virgincula is closely similar in appearance to A. speciosa but can be differentiated by their larger size and larger eyes. Their ranges do not overlap in British Columbia since A. virgincula is only known from the southwest corner of the province while A. speciosa occurs in the far north. A. quenseli, which overlaps A. speciosa in range and habitat, is also similar. It has a pale proximal dorsal antenna and has pale transverse lines near the distal cell of the forewing, both lacking in A. speciosa.

This species occurs on tundra and in bogs and wetlands.

This species occurs in northern North America, from central Alaska to Hudson Bay and Labrador. The range extends south along the Rocky Mountains in Alberta. The range is mostly north and west of the range of Apantesis virgincula.

No information is presently available for this species, but it probably feeds on general herbaceous vegetation like closely related species.