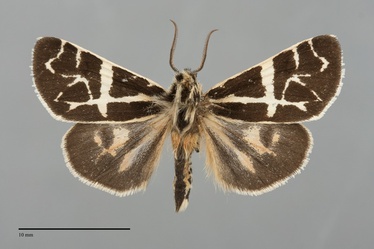 Apantesis yukona is a rarely collected, small to medium-sized (FW length 13-15 mm) tiger moth that flies in southern Yukon Territory during the summer. It has narrow white lines on the nearly black forewing and a dull yellow to red hindwing with confluent spots. This moth resembles Apantesis nevadensis, but has duller color on both wings and slightly reduced white lines on the forewing. The forewing ground color is nearly very dark gray with a slightly brown tint. The costa, longitudinal subcubital line, and the transverse lines are off white. The subcubital line extends distal to the postmedial line and appears forked where it reaches the subterminal line. The antemedial, medial, postmedial, and subterminal lines are usually present although the antemedial line is reduced to focal widenings of the pale costa and subcubital line in some specimens. The median line is usually the thickest of the transverse pale lines and extends across the subcubital line to near the trailing margin. The postmedial and zigzag subterminal lines are thin and often incomplete, although both usually extend posterior to the subcubital line. The hindwing ground is yellow buff, dull pale orange, or dull light red marked by slightly brownish dark gray. The peripheral spots are often fused along the wing margins. The dorsal thorax is striped dark gray and off white. The ventral thorax is pale, usually off white or buff. The male antenna is biserrate, covered dorsally with brown scales.

This species is unlikely to be confused with other Apantesis species in northern British Columbia. It is most similar to A. nevadensis, which is common farther south in our region, and the ranges are not known to overlap. Compared to A. nevadensis from British Columbia, A. yukona is duller, the forewing white lines are reduced, and the hindwing spots are larger and more often confluent. The underside of the thorax is buff in A. yukona and yellow in A. nevadensis (Schmidt 2009). Apantesis margo occurs in north-eastern British Columbia. Its forewing pale lines are reduced compared to those of A. yukona. In A. margo, the medial line does not extend posterior to the subcubital line, and the subcubital line ends proximal to the subterminal line. Apantesis margo has reduced eye sizes and is diurnal. It flies in late spring and early summer, earlier than A. yukona.

Apantesis yukona is associated with a variety of open habitats characterized as dry or rocky south-facing slopes with grasses by Schmidt (2009). It has been collected by L. Crabo in prairie remnants in central Yukon.

This species is restricted to Yukon Territory where it is known from fewer than ten localities. The range extends as far north as the Richardson Mountains. It is rare in collections, with fewer than ten known specimens at the time of its description in 2009.

The larvae, like those of other Apantesis species, are likely to be general feeders on forbes. A larva of A. yukona was collected by L. Crabo in prairie habitat near Lac LaBerge on June 19, 1989. It pupated without feeding and hatched on July 14 the same year.

Adults are nocturnal. A male was collected in central Yukon at night by L. Crabo and M. Peterson in a malaise trap.