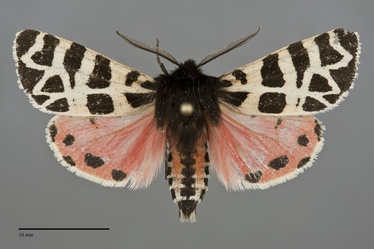 Apantesis nevadensis is a widespread, common, late summer and fall-flying Apantesis with pale pink to red hindwings. It is medium-sized (FW length 15–18 mm). The forewing appears black with off - white transverse banding - all of the pale transverse marks are present and only the cubital vein is pale. The hindwing color varies regionally. It is red in populations from mesic mountain and northern locations and paler in those from desert environments. It is variably marked with black spots and a marginal band, with more spots in populations from the north and west part of the range (see below). The head and thorax are variable, either black or striped black and white like most other Apantesis species, while the abdomen is slightly darker than the hindwing ground color striped with black.

This species is most similar to Apantesis eureka found in Utah and southern Idaho. Apantesis eureka has small eyes, unlike the nocturnal A. nevadensis. The two species can also be separated temporally because A. eureka flies in spring, likely during the day, and A. nevadensis is a late-season nocturnal species. Apantesis behrii, found in southwestern Oregon, has more yellow light markings, wider forewing lines, and less strongly marked hindwings than A. nevadensis. The smaller species Apantesis blakei, only known from southeastern British Columbia in the Pacific Northwest, is similarly patterned to A. nevadensis, but its hindwings are light orange rather than red, it has a pale antenna, and it occurs earlier in the year than A. nevadensis.

Larva is densely covered with long black hairs, and has a pale yellow middorsal line.

This species is common to abundant in desert habitats at low elevations east of the Cascades including both juniper woodlands and open sagebrush rangelands. It also occurs in open forests, including high ridges in the Cascade Mountains.  It may experience epidemic outbreaks on rangelands recently burned by wildfires in central Oregon.

This species is widely distributed in the Pacific Northwest. In British Columbia it occurs commonly in the central Interior, the Rocky Mountain Trench, and along the Peace River. It occurs widely in the dry interior of Idaho, Oregon, and Washington. Apantesis nevadensis is only found in a few locations west of the Cascade Mountain crest, including on Vancouver Island, the south Puget Sound, and coastal Oregon.

Apantesis nevadensis is a species of the American West. Outside of the Pacific Northwest most records are from the Intermountain Region and the Rocky Mountain states in the United States. In Canada it is found in Alberta grasslands, most commonly in the southern province, with a few records further east in southern Saskatchewan and Manitoba.

This species feeds on general herbaceous vegetation.  Wild larvae were found feeding on both lupines (Lupinus spp.) in the Fabaceae and desert pansy (Viola beckwithii) in the Violaceae at Frenchglen in southeastern Oregon (P. Hammond observations).

Adults are single brooded and fly in late summer and fall. Males are nocturnal and come readily to light, but females are never collected in light traps.