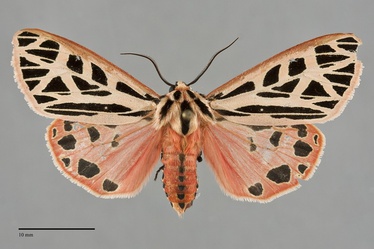 Apantesis doris is a rare white, pink, and black Apantesis that flies in southeastern British Columbia and adjacent United States during spring and early summer. It is relatively large for the genus Apantesis (mean FW length 19 mm). The forewing appears light pinkish white with black markings with wide pale transverse lines, veins, costa, and fringe. This species has an extra pale transverse mark across the cell that is absent in our other Apantesis species. The hindwing is deep pink with small pale rimmed black spots medial to the discal spot and larger spots near the outer margin. The head is pale and the thorax appears striped due to black marks on the collar, tegulae, and central thorax. The abdomen is darker pink than the hindwings with series of longitudinal black spots. The antennae are black.

Apantesis doris is similar in size and pattern to A. virgo and A. parthenice but can be distinguished from both of these species by the extra pale transverse bar in the forewing cell. The hindwing is also pink, not red. Apantesis doris usually flies earlier in the season than either of these moths. Apantesis phyllira, a moth that has only been observed once in the Idaho Panhandle in our region, resembles A. doris in having a busy pattern of pale lines on the distal forewing, but its hindwing is bright red rather than pink.

The subspecies name A. doris minea (Slosson) is available for northern populations, including those from the Pacific Northwest. It is distinguished by smaller size, thinner forewing bands, and larger hindwing spots than A. d. doris.

The habitat of A. doris minea is poorly known but might include wetlands (Schmidt 2009). Many Pacific Northwest records of this moth are from river valleys.

Apantesis doris is rarely collected and has only been found in the Okanagan region of British Columbia and northern Idaho in the Pacific Northwest.

This species is widespread but infrequently collected. Outside the Pacific Northwest it occurs widely in Alberta where it has been found to the northwestern province and western Montana. Its range extends east in a narrow band near the Canada-United States border. In the east it is found in the Atlantic Coast provinces and states from Nova Scotia to northern Florida and west to central Texas.

This species feeds on general herbaceous vegetation, particularly on Asteraceae.

Adults of Apantesis doris have been collected in June and August in and near the Pacific Northwest. This species is nocturnal. It is not known whether the apparent scarcity of this species throughout its range reflects inadequate sampling of its habitat, ineffectiveness of standard collecting methods such as light trapping, or is a true indication of its rarity.