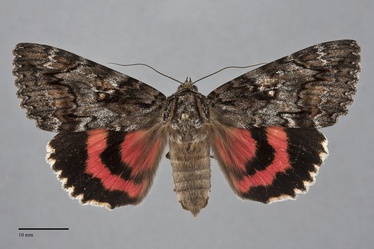 Catocala aholibah is a large underwing moth (FW length 29 - 37 mm) that flies in areas with oaks in the western Pacific Northwest during the summer and early fall. It has mottled, dark violet-gray and brown forewings, and banded, dark red and black hindwings. The forewing ground color on the median area is powdery mottled blue-gray and light brown, lighter white with scattered brown scales between the antemedial line and the reniform spot. The basal wing and terminal are darker gray brown, and the antemedial and subterminal area are dark wood brown. A short black basal dash is present lateral to the basal line. The veins distal to the postmedial line are powdery dark gray. The terminal area distal to the cell and near the anal angle is darker gray than the rest of the distal wing. The basal line is short, black. The antemedial line is double, thick and black anterior to the fold and thinner gray below the fold, filled with the color of the adjacent antemedial area. A diffuse dark gray median line is evident on the anterior wing, passing obliquely through the reniform spot. The postmedial line is black, weakly scalloped between the veins, with two long teeth toward the outer margin below veins M1 and M2 and drawn sharply toward the base on vein 1A+2A above the trailing margin. The subterminal line is dark gray, double filled with powdery light whitish gray, evenly lightly toothed, oblique toward the outer margin from the costa to vein M1 and then parallel to the outer margin. The terminal line is a series of dark spots followed by light tan, strongly scalloped. The fringe is gray-brown to dark brown. The reniform spot is dark gray to black, ovoid with a smooth medial and scalloped lateral outline, filled with light gray to light brown peripherally and red-brown centrally. A black subreniform spot is filled with white to light brown. The hindwing is dark pink-red. The medial and marginal bands are irregular and the former is variable, ending before or at the inner margin. The hindwing fringe is white to pale yellow with dark gray checkering on the mid-wing. The head and thorax are powdery dark gray-brown, sometimes with scattered white scales, with black edges on the collar and tegulae. The male antennae are filiform.

This species is most likely to be confused with Catocala ilia in areas with oak, the foodplant of both species. It has a paler forewing than C. aholibah, light blue-gray and brown, and its hindwing is distinctly orange rather than red. Catocala ophelia is similar in general color to C. aholibah on both wings but is much smaller. Other Catocala with red hindwings in our area have predominantly gray forewings.

Larva is mostly smooth, gray with a rosy pink hue, with a ventral fringe of short whisker-like hairs below the lateral line.  It is illustrated by Miller & Hammond (2003).

This species is widely distributed in western North America within oak woodlands.  In the Pacific Northwest, it is common to abundant in oak woodlands at low elevations and mixed hardwood-conifer forests at middle elevations in southwest Oregon.  It is uncommon to rare in oak forests of the Willamette Valley and along the east slope of the Cascades.  This species is considered to be management sensitive, depending on oaks as a larval foodplant.

Catocala aholibah is found in most areas where oaks grow in the western part of the Pacific Northwest, from southern Vancouver Island to southern Oregon. It is predominanly found east of the Cascades in Washington, but is found on both sides of this range in Oregon.

This species is found in western North America. It occurs throughout most of California and the Four Corners States. A few records are shown from western Texas and western North Dakota on the Moth Photographers Group web site.

This species is a foodplant specialist feeding on oaks (Quercus spp.) in the Fagaceae.  In the Pacific Northwest, the primary larval foodplant is Oregon white oak (Q. garryana).

The adults of C. aholibah are on the wing during the summer and early fall. Records from our region begin in late June and extend through the end of August.