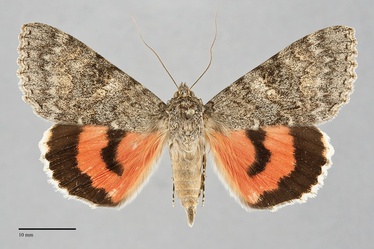 Catocala hermia is a medium-sized underwing moth (FW length 31 - 32 mm) that flies in extreme eastern Idaho in the Northwest. In some specimens it has a powdery gray-tan forewing with inconspicuous lines, and in others, a smoother blue-gray forewing with sinuous black transverse lines. The forewing margin is scalloped. The color is slightly variable, powdery gray-tan or smoother slightly blue to greenish gray with a tan tint, slightly lighter in the medial cell, anterolateral median area, and mid-subterminal area. The lines are variable in darkness, faint to prominent. The basal line is dark gray, limited to the costa. The antemedial line is moderately irregular, double with darker lateral and fainter medial components filled with lighter blue-gray, oriented obliquely from anteromedial to posterolateral. The median lie is diffuse dark gray on the costa and surrounding the reniform spot. The postmedial line is sinuous with short teeth toward the outer margin, strongest opposite the cell, a wide connection to the subreniform spot across the median area, and a long tooth toward the base across the lower fold, the horizontal portion of which is slightly thicker than the rest of the line. The line is offset toward the base on the costa where it forms a spot anterior to the distal reniform spot, strongly oblique lateral from the costa to the strongest teeth opposite the cell, then oblique toward the base across the mid-forewing to the horizontal component on the lower median area. The subterminal line is double, gray with light blue-gray filling, very diffuse, evenly zigzag across the wing, parallel to the anterior postmedial line from the costa to the cell and nearly perpendicular to the wing from the cell to the posterior margin. The terminal line is a series of dark gray lines followed by light tan spots between the veins. The fringe is light gray-tan with gray longitudinal stripes. The reniform spot is dark gray, D-shaped with an irregular lateral edge, filled with the ground color and a central gray D or spot. The subreniform spot is filled with light tan-gray similar to the adjacent pale medial cell. The hindwing is pinkish red with black median and marginal bands. The median band is thick and ends bluntly well short of the inner margin. The head and thorax are similar in color to the forewing with darker gray lines across the collar and edges on the tegulae. The male antenna is filiform.

This species should only be expected near the eastern border of the Northwest region. It can be identified by its powdery gray-tan forewing or blue-gray color with undulating black and pale antemedial and postmedial lines. It is most similar to Catocala faustina, a more widespread species in the dry interior of the Northwest. C. faustina has longer paired teeth in the postmedial line opposite the cell than C. hermia, a less diffuse pale subterminal line, and a more contrasting horizontal portion of the postmedial line across the lower median area. Its color is smoother than powdery specimens of C. hermia and less blue-gray than pale ones. Catocala hermia could potentially be confused with Catocala irene. This species has a strong rusty tint on the entire forewing and rust-colored filling of the reniform spot, unlike the gray spot of C. hermia.

No information is presently available for this species is the Pacific Northwest, although it appears to occupy riparian habitats at low elevations in the Rocky Mountain region.

This species has been recorded from southeastern Idaho (Moth Photographers Group).

Catocala hermia occurs on the Great Plains as far north as southern Alberta and as far east as the western Dakotas. It is widespread in the southern Rocky Mountain and Intermountain region to eastern and southern California.

No information is presently available regarding larval foodplants of this species. It probably feeds on poplars (Populus spp.) and willows (Salix spp.) in the Salicaceae like related species

There is limited information on this species in the Northwest. It flies during the summer and fall in other portions of its range. It is nocturnal and comes to lights and sugar baits.