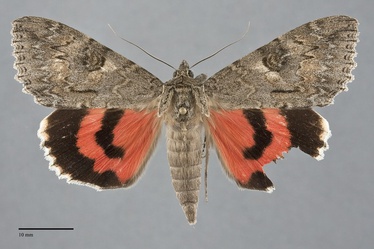 Catocala faustina is a large, medium-sized underwing moth (FW length 29 - 33 mm) that flies in dry regions during the summer and fall. Its forewings have an even gray-tan color, a gray reniform spot, a dark transverse line across the lower median area, and it has a banded red hindwing. The forewing color is nearly even, slightly blue or green tinted in the median area and tan in the subterminal area, with a slightly paler spot in the cell medial to the reniform spot. The basal line is dark gray, limited to the costa. The antemedial line is pale brown-gray to gray, double with pale gray-tan filling, evenly undulating and oblique from anteromedial to posterolateral. The median line is diffuse gray anterior to the reniform spot. The postmedial line is dark gray medially and pale tan laterally, darkest in a horizontal segment across the lower median area, drawn toward the base where it forms a dark spot on the costa anterior to the distal reniform spot, then irregularly toothed with a pair of long teeth toward the lateral margin opposite the cell. The line is connected to the subreniform spot as a hairpin loop and is drawn sharply toward the base in the lower fold where it forms the dark line described above. The subterminal line is double, diffuse brown-gray filled with pale gray-tan, evenly and strongly toothed across the wing, parallel to the oblique postmedial line near the costa and to the outer margin below the cell. The terminal line is a series of dark gray lunules between the veins. The fringe is similar to the terminal area in color with gray longitudinal stripes. The reniform spot is diffuse dark gray, D-shaped with irregular lateral margin, filled with the adjacent ground color and a gray D centrally. The subreniform spot is thing, gray, often incomplete posteriorly, filled with slightly lighter than the ground color to similar pale as in the adjacent medial cell. The hindwing is dark pink-red with black median and marginal bands. The medial band ends bluntly without reaching the inner margin. The hindwing fringe is white to pale yellow with a pink and gray base. The head and thorax are gray-tan with slightly darker gray barring on the collar and edges of the tegulae. The male antenna is filiform.

This species can usually be identified from other Catocala species by its medium size, pale gray-tan forewing, and dark gray reniform spot lacking rusty color. It is smaller and much less powdery than Catocala junctura. Catocala irene has a more mottled forewing with a distinct rusty color, including in the reniform spot. Catocala hermia, a species that is restricted to the far eastern part of the Northwest, is similar in size and color. It is variable, but tends to be either more powdery with an indistinct pattern, or more blue-gray, with darker lines than C. faustina. It also differs in details of the pattern, including a more diffuse subterminal line and shorter paired teeth on the portion of the postmedial line that is opposite the cell.

This species and Catocala allusa have been combined recently (Gall & Hawks 2010). We believe that these moths are partially sympatric without evidence for intergradation and maintain them as separate species pending further study.  See additional comments under C. allusa.

This species is found in California and throughout the Great Basin to the south of our region. It is not found east of the Rocky Mountians.

This species is a foodplant specialist feeding on Salicaceae including both willows (Salix spp.) and cottonwoods (Populus spp.).  It particularly favors low willows growing along creeks and rivers in desert regions.

Adults fly during late summer and fall, beginning in early July and peaking toward the end of August and early September. It is nocturnal and comes to lights and sugar baits.