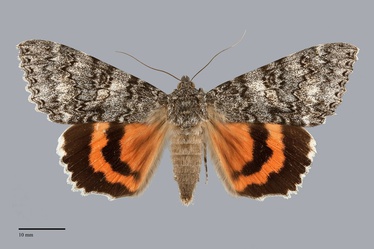 Catocala unijuga, the once-married underwing, is a large Catocala (FW length 34–37 mm) with mottled powdery gray forewing and orange-red hindwing that flies in the northern and eastern Pacific Northwest during late summer and fall. The forewing is relatively long and pointed for the genus, with a strongly scalloped outer margin. It medium-dark gray, slightly bluish at the base and in the posterior median area, with strongly powdery appearance due to scattered black scales. The median area abutting the reniform and subreniform spots, the anterolateral median area, and mid-subterminal area are lighter whitish gray. The basal line is black, limited to the costa. The antemedial line is black with blue-gray filling, wide, double with strong lateral and weaker medial components, moderately irregular, oblique. The medial line is dark gray, limited to the costa. The postmedial line is black medially and pale gray laterally, thinner than the antemedial line, evenly toothed across the mid-wing, connected to the subreniform spot and sharply drawn toward the base in the lower fold. The subterminal line is whitish gray medially and dark gray laterally, diffuse, evenly zigzag, parallel to the postmedial line near the costa and parallel to the outer margin below the cell. The terminal line is a series of dark gray lunules between veins followed by a continuous dark gray line. The fringe is whitish gray with a striped gray base. The reniform spot is D-shaped with an irregular lateral border, double, dark gray with peripheral filling of the adjacent ground. The subreniform spot is large, dark gray, filled with powdery white. The hindwing is dark red-orange with black median and marginal bands. The medial band is continuous to the inner margin. The head and thorax are powdery dark gray with darker transverse lines across the collar and at the edges of the tegulae. The male antenna is filiform.

This species can be identified by its large size, pointed powdery gray forewing without a strong blue tint, and dark orange hindwing with a median line that reaches the inner margin. It is most similar to Catocala semirelicta, a more widespread and common species in the Northwest. C. semirelicta has a distinct light blue color on the medial area, is suffused with dark near the reniform spot and along the postmedial line in the fold, and its hindwing less orange with a blunt median line that ends short of the margin.

Catocala unijuga is found in most of British Columbia and adjacent northern Idaho and northeastern Washington in the Northwest. It has been recorded from the Cascades and might occur there in low numbers; however, these records could be misidentified C. semirelicta.

Catocala unijuga is found to the Atlantic from our area, predominantly in the boreal zone of southern Canada and the northern United States. The range extends slightly south of the Great Lakes, with a few isolated records further south. It is the only Catocala in Alaska.

This species is a foodplant specialist on Salicaceae including both willows (Salix spp.) and aspens and cottonwoods (Populus spp.). It may prefer quaking aspen (P. tremuloides) in the West.

The flight period of C. unijuga is late summer and fall, typically in August and September.