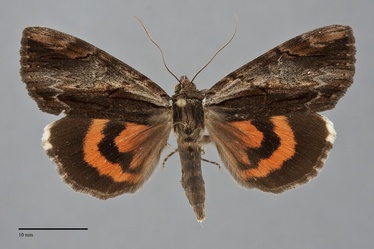 Catocala ultronia is a predominantly eastern species that has been included on lists of British Columbia moths. It is a small to medium-sized underwing moth (FW length 23 - 29 mm) that flies during the summer and has a variable brown, tan, and gray forewing and banded bright red and black hindwing. The forewing has outwardly convex outer margin and a slightly scalloped fringe. The pattern is variable, with several named forms in eastern North America. All of the forms have a dark brown posterior area and a warm tan patch on the anterior wing distal to the postmedial line. A long diffuse black basal dash is present. The color of the anterior base, median area and adjoining mid-distal area is more variable, tan-gray, tan, or streaked dark brown. The distal veins are black on the more streaked forms. A short black basal line is present on the costa. The antemedial line is dark gray to black, often with a black segment on the mid-wing that is joined to the postmedial line by a transverse black line in the fold, usually undulating and oblique from anteromedial to posterolateral. The postmedial line is black, gray, or with segments of both colors, oblique toward the lateral margin from the costa, then very strongly zigzagged on the mid-forewing with teeth nearly reaching the median line and subterminal line in the fold. The subterminal line is also variable, absent, pale tan or white, very strongly dentate on the mid and posterior wing parallel to the postmedial line. The terminal line is a series of short black lines followed by tan spots between the veins. The fringe is variable, matching the color of the adjacent terminal area. The reniform spot is usually faint, occasionally absent of with a pale whitish outline filled with the color of the adjacent forewing area. The hindwing ground color is bright red with slightly irregular black median and marginal bands; the former narrows medially and extends to the inner margin. The hindwing fringe is white with a pink base at the anterior margin, then gray or white with a pink and gray base on the rest of the wing. The head and thorax are dark wood brown with dark scales on the tegulae. The male antenna is filiform.

This species can easily be identified throughout North America by its small- to medium size, smooth brown and tan forewing with a longitudinally-oriented pattern, and bright red and black hindwing. It cannot be mistaken for any other moth in eastern British Columbia.

This species is very common in hardwood forests of eastern North America, extending westward across Canada to the Rocky Mountains.  It is most likely to occur in riparian forests in British Columbia.

The range of this species includes much of eastern and central United States and adjacent southern Canada. It is found as far south as the Gulf Coast and eastern Texas, including Florida. The range extends west to the foothills of the Rocky Mountains to south-central Alberta.

This species is a foodplant specialist feeding on Rosaceae including cherries (Prunus spp.) and hawthorns (Crataegus spp.).

This species typically flies during July across its range. It is nocturnal and is attracted to sugar baits and lights.