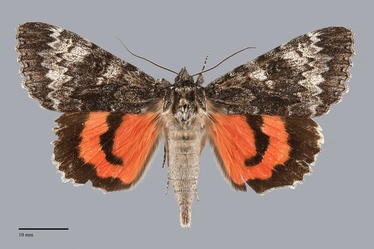 Catocala grotiana is a medium-sized underwing moth (FW length 34 - 36 mm) that flies in southeastern Oregon and southern Idaho during late summer and fall. It has a black-gray forewing with a wide pale whitish stripe across the distal to the reniform spot and in the subterminal area, and a dark red or orange and black striped hindwing. The forewing is shaped like a right triangle with a scalloped outer margin. The ground color is dark gray, usually blackish and often with a slight blue tint. The median area medial and lateral to the reniform spot and the entire subterminal area are mottled white with variable black suffusion. The basal and antemedial lines are black, double with dark gray filling. Both lines are inconspicuous against the adjacent dark wing. The antemedial line is undulating, oriented obliquely toward the outer margin. The postmedial line is black, moderately strongly toothed, especially opposite the cell, and is drawn sharply toward the base above vein 1A+2A to form a dark bar across the lower median area. The median line is black, usually indistinct against the dark background. The subterminal line is dark gray, evenly toothed across the forewing, slightly oblique toward the anal angle from the costa to the mid-cell, then nearly parallel to the outer margin. The terminal line is a series of black spots followed by gray spots between veins. The fringe is gray with thin black longitudinal stripes. The reniform spot is dark gray, wide, inconspicuous against the dark adjacent median line. The subreniform spot is black filled with white to light gray. The hindwing is slightly orange-tinted bright red with black median and marginal bands. The median band is variable, usually ending bluntly before the inner margin. The hindwing fringe is white to pale yellow with dark gray checkering on the mid-wing. The head and thorax are nearly uniform dark blue-gray. The male antenna is filiform.

This species can be identified by the pale subterminal area on a dark gray background. It is similar to Catocala briseis and we suspect that it is a southern Rocky Mountain subspecies of it.

This moth has been collected in mountain forests near aspen groves in Idaho and in riparian forest near the lower limit of trees in southeastern Oregon. It is uncommonly collected in the Northwest, possibly because few moth collectors have visited its range during the fall.

Catocala grotiana is primarily a Rocky Mountain region species. It has been found but a few times in the Pacific Northwest in Idaho and southeastern Oregon. It has been collected near southeastern British Columbia at Waterton Provincial Park, Alberta (Gary Anweiler personal communication).

This species is found predominantly in the southern Rocky Mountains and eastern Great Basin. It is recorded from the Four Corner States and southern Nevada on the Moth Photographers Website.

The larva of C. grotiana has been recorded from Poplar (Populus spp.) and willow (Salix spp.) in the Salicaceae.

The flight period of C. grotiana is late summer and fall, typically in August and September.