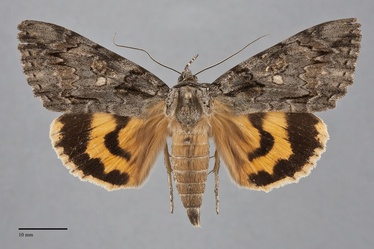 Catocala neogama is a large Catocala (FW length 34–37 mm) that flies in eastern Oregon during the fall. It has gray-brown forewings and orange and black banded hindwings. The forewing apex is slightly pointed and the outer margin is scalloped. The ground color is dusty bluish gray-brown, grayer in the median area and more brown on the base and distal wing. Bands of mottled warm medium-dark brown are present medial to the antemedial line and in the entire subterminal area. The terminal area is mottled tan and gray-brown. A wood-brown patch is sometimes present medial to the subreniform spot and in the adjoining antemedial area. The veins are black on the distal forewing area, widening toward the outer margin. Some specimens are suffused with powdery charcoal-gray, heaviest on the median area and wing base. Diffuse black basal, apical, and anal dashes are present, variable from fairly well-defined to diffuse. The basal, antemedial, and postmedial lines are black. The basal line is oblique toward the outer margin. The antemedial line is strongly waved, especially near the trailing margin, and is oriented oblique from anteromedial to posterolateral. The postmedial line is strongly sinuous and waved between the veins, strongly drawn toward the base on the costa, projected laterally as two sharp teeth opposite the reniform spot, and drawn toward the base with a single inward tooth above the trailing margin. The median line is a diffuse gray shade near the costa. The subterminal line is double, tan with light gray-tan filling, serrate, parallel to the oblique postmedial line near the costa and bent parallel to the outer margin below vein R5. The terminal line is a series of black medial and light tan lateral spots. The fringe is the same color as the adjacent terminal area and is traversed by black at the ends of the veins. The reniform spot is large, oval or weakly hourglass-shaped, outlined in gray to black and filled with tan peripherally and warm brown centrally. The subreniform spot is black filled with tan. The hindwing is ochre-orange with irregular black median and marginal bands. The hindwing fringe is light orange with dark gray at the ends of the veins. The head and collar are dark brown-gray with transverse lines across the mid and distal collar. The rest of the thorax is lighter, with a dark transverse line behind the collar and dark edges on the tegulae. The abdomen is orange gray-brown. Weak dorsal tufts are present on several anterior abdominal segments. The male antenna is filiform.

This species and Catocala piatrix are our only large underwing moths (Catocala spp.) with orange hindwing ground color. Catocala piatrix is known from southwestern Oregon. It lacks the forewing black basal dash of C. neogama and has a broad pale gray band lateral to the antemedial line that is similar in color to the pale filling of the subreniform spot. This part of the medial area is typically darker than the pale subreniform spot filling in C. neogama.

This species is widely distributed in riparian forest habitats with walnuts in eastern North America extending westward through the Southwest.  In the Pacific Northwest, the species may becoming established in urban areas and along riparian zones where walnut trees are present.

Catocala neogama has been found at only a few localities in eastern Oregon, eastern Washington, and Idaho. These localities include near Durkee, Baker County, and at Hood River, Hood River County (Richard Worth personal communication 2010) in Oregon. An additional record is shown for northwestern Idaho on the Moth Photographers Group website.

This species is widely distributed in eastern North America in association with its foodplant, walnut. It is found from southern Canada to the Gulf Coast, excluding peninsular Florida. The range extends west through the southern half of the United States, reaching Utah and Arizona.

This species is a foodplant specialist feeding on walnuts (Juglans spp.) in the Juglandaceae.

This species flies in late summer. The Baker County, Oregon specimen was fresh in mid September.