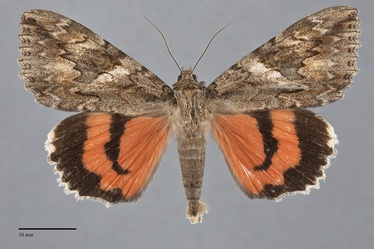 Catocala irene is a medium-sized underwing moth (FW length 30 - 33 mm) that flies in desert regions in the late summer and fall. It has a mottled reddish tan and gray forewing with a rusty reniform spot. The forewing has a truncate shape with a scalloped outer margin. The color is mottled light rusty tan with blue to slightly greenish-gray in the median area near the reniform spot and below the fold as well as in the terminal area. The medial median area near the reniform spot is whitish, and other pale areas are located in the anterolateral median area, in the mid-subterminal area. Diffuse dark gray streaks are present at the base and in the terminal area below the apex and in the fold. The basal line is dark gray, limited to the costa. The antemedial line is dark gray, thick on the costa and thinner elsewhere, zigzag, oriented oblique toward the anal angle from the costa. The median line is dark gray on anterior to the reniform spot. The postmedial line is black medially and pale tan laterally, sharply drawn toward the base to form a spot on the costa anterior to the lateral reniform spot, then strongly toothed toward the outer margin opposite the cell, broadly connected to the subreniform spot, and strongly toothed toward the base above the trailing margin where it is thickened to a black transverse bar in the fold. The subterminal line has a darker lateral component that is gray to reddish brown and a paler blue-gray to tan medial component, evenly zigzag across the wing, parallel to the oblique anterior postmedial line near the costa and the outer margin below the cell. The terminal line is a series of black lines or spots. The fringe is the same color as the terminal area. The reniform spot is diffuse dark gray with rust-brown filling. The subreniform spot is gray, usually incomplete posteriorly, filled with light whitish tan. The hindwing is dark pink-red with black median and marginal bands. The median band is slightly upturned posteriorly and tapers or ends bluntly short of the medial margin. The hindwing fringe is white to light yellow with pink or peach inner row anteriorly and faint gray checkering at the base on the mid-wing. The head and thorax are slightly reddish tan with lighter gray tegulae and dark gray across the mid-collar and on the edges of the tegulae. The male antenna is filiform.

This species is usually the easiest to identify of our red-hindwing Catocala species because of its rusty color, especially the filling of the reniform species. It is most likely to be confused with Catocala faustina, a pale gray-tan species with which it flies. C. faustina has a gray reniform spot and lacks the light, blue-gray or greenish, and rusty mottling of C. irene.

This species is found in the drier regions of western North America.  In the Pacific Northwest, it occurs in low-elevation riparian zones along creeks and rivers in desert regions. It is usually uncommon to rare, but may be locally frequent.  It also occurs uncommonly in similar habitats at low elevations west of the Cascades.

Catocala irene is found in the drier interior portions of the Pacific Northwest, including the Columbia Basin, southeastern Oregon, and Idaho's Snake River Plain.

The range of this species is California and the Great Basin outside of the Pacific Northwest.

This species is a foodplant specialist feeding on Salicaceae including both willows (Salix spp.) and cottonwoods (Populus spp.).  Based on habitat, it may prefer cottonwoods compared to willows.

The adults are single-brooded and fly in late summer and early fall. The first individuals hatch in mid July. This species is nocturnal and comes to light and sugar baits.