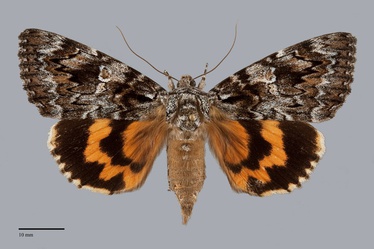 Catocala ilia is a large underwing moth (FW length 31 - 37 mm) that flies in areas with oak during the summer. It has mottled blue-gray and brown forewings and orange-red and black banded hindwings. The forewing color is variable, usually powdery light blue-gray in the median area basal to the reniform spot and variable elsewhere. The forewing area basal to the antemedial line and distal to the reniform spot are darker powdery blue-gray and brown to mottled wood brown. A wide diffuse basal dash is present lateral to the basal line, and the veins on the distal area and adjacent to the lateral reniform spots are often powdery dark gray to black. The basal line is short, black. The antemedial line is double powdery black, usually with the two components similar in darkness and filled with the color of the adjacent antemedial area, sinuous with a tooth toward the inner margin on vein 1A+2A near the trailing margin and slightly oblique from anteromedial to posterolateral. A diffuse black median line is evident from the costa to lateral to the reniform. The postmedial line is black, strongly toothed toward the outer margin between the veins, especially below veins M1 and M2, and drawn medially on CuA2 as a hairpin loop to form a subreniform spot. The subterminal line is double dark gray filled with powdery blue-gray to whitish gray, dentate between the veins, oblique toward the outer margin near the costa and parallel to the outer margin below the anterior cell. The terminal line is a series of black lines followed by cream spots between the veins. The fringe is blue-gray to brown, weakly checkered. The broad ovoid reniform spot is located on the medial half of the wing, has a double outline with a black outer and black or brown inner component filled with white, with warm brown or white central filling. The subreniform spot is pale gray to white filled centrally with the same color or brown. The hindwing is reddish orange with irregular median and marginal bands. The median band reaches the inner margin. The hindwing fringe is pale orange with weak black checkering. The head and thorax are powdery bluish brown-gray with weak bands across the collar, edges on the tegulae, and dark centreal thorax. The male antenna is filiform.

This species is most likely to be confused with Catocala aholibah, our other large oak-feeding Catocala with red hindwings. The hindwings of C. ilia are more orange than those of C. aholibah, which are deep red with a slight purple tint. The forewing of C. ilia is lighter.

The western subspecies Catocala ilia zoe is quite distinctive and might prove to be a different species from the eastern populations.

Larva is mottled green and black with small dorsal bumps, resulting in a cryptic color pattern that matches the lichens on oak branches.  It is illustrated by Miller & Hammond (2003).

This species is widely distributed in oak woodlands and forests throughout North America.  In the Pacific Northwest, it is frequent in oak woodlands at low elevations and mixed hardwood-conifer forests at middle elevations in southwest Oregon, but is rare in oak forests of the Willamette Valley.  This species is considered to be management sensitive, depending on oaks as a larval foodplant.

Catocala ilia is associated with oak forests in western Oregon and Washington, occurring as far north as Olympia, Washington. It occurs east of the Cascade Mountains in Klamath County, Oregon and Klickitat County, Washington.

Catocala ilia is a widespread species. It occurs widely in eastern hardwood forests, although the western subspecies zoe is quite different in appearance from eastern specimens and might represent a distinct species. The eastern populations occur from southern Canada to the Gulf Coast, including Florida. The range is restricted to areas with oak in the West, mainly the southern Rocky Mountains and California.

This species is a foodplant specialist feeding on oaks (Quercus spp.) in the Fagaceae, and primarily feeds on Oregon white oak (Q. garryana) in western Oregon.

Catocala ilia flies in the summer months and has been found from early June through August in our area. It is nocturnal and comes to light and sugar baits.