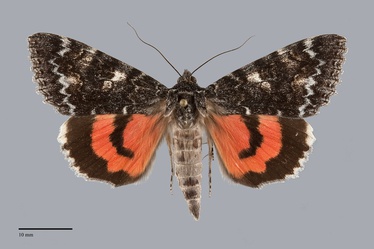 Catocala briseis is a medium-sized underwing moth (FW length 28 - 32 mm) that flies in boreal and montane forests during late summer and fall. It has black-gray and white forewings and dark red-and-black banded hindwings. The forewing margin is scalloped. The ground color is dark gray, usually blackish and often with a slight blue tint. Pale spots are present between the reniform spot and the antemedial line, distal to the reniform spot, and in the subterminal area opposite the cell and on the mid-forewing. The subterminal area sometimes has a slightly brown tint. The basal, antemedial, and postmedial lines are double, black, with slightly lighter filling than the ground color, often white at the trailing margin and usually paler in the postmedial line than in the antemedial line. The basal and antemedial lines are relatively inconspicuous due to the dark adjacent wing color. The antemedial line is evenly waved across the wing at a slight oblique angle toward the anal angle. The postmedial line is moderately strongly toothed, especially opposite the cell, and is drawn sharply toward the base above vein 1A+2A. The median line is a black shade in the anterior median area. The subterminal line is dark gray to black, double, filled with bluish white or pale gray, evenly toothed across the wing nearly parallel to the outer margin and slightly inset toward the base near the costa. The terminal line is a series of black spots followed by white to light gray spots between veins. The fringe is gray with thin black longitudinal stripes. The reniform spot is dark gray, wide, inconspicuous against the dark adjacent median line. The subreniform spot is black filled with light gray. The hindwing is slightly orange-tinted bright red with black median and marginal bands. The median band is variable, ending bluntly before the inner margin or narrowing and reaching the margin. The hindwing fringe is white to pale yellow with dark gray checkering on the mid-wing. The head and thorax are nearly uniform dark blue-gray. The male antenna is filiform.

This species can usually be recognized by its moderate size, blackish forewing with pale whitish medial to the reniform spot and in the subterminal line. It is similar to several other species in our area. The differences between species are relatively subtle and can be difficult to discern, especially with single specimens or worn ones. Catocala californica is similar but tends to have a slightly lighter gray forewing with less contrasting filling of the lines - more gray than white. Catocala semirelicta is a variable species, usually slightly larger and lighter powdery blue-gray in color and its hindwing is slightly lighter and more orange-red. Catocala allusa flies west of the Cascades. It has a slightly browner wing color with thicker and more strongly toothed postmedial line than C. briseis.

Catocala briseis can be difficult to separate from Catocala californica where they approach each other. Paul Hammond believes that they represent ecotypes of the same species.

Catocala grotiana replaces C. briseis in the southern Rocky Mountain states and occurs in southern Oregon and Idaho in our region. It has more extensive white in the subterminal area than C. briseis. It is likely that this is a subspecies of C. briseis.

The larva is mostly smooth, gray and tan with small red-orange subdorsal spots, a red-orange and black patch in the middle of the back, and a ventral fringe of whisker-like hairs below the lateral line.  It is illustrated by Miller & Hammond (2003).

This species is widely distributed across the northern parts of North America in cool, moist forests.  In the Pacific Northwest, it is common in mixed hardwood-conifer forests at higher elevations in the mountains, particularly in the riparian zones along creeks and rivers, and in quaking aspen forests of the Rocky Mountains.  It is less common or rare in riparian zones at low elevations both west and east of the Cascades.

Catocala briseis is widespread in forests in southern British Columbia, adjacent Washington, and the Idaho Panhandle. The range extends south western Washington and Oregon from the east slope of the Cascades to the Pacific Coast. It is less commonly found further south in the mountains of eastern Oregon and appears to be replaced by Catocala grotiana in extreme southeastern Oregon and southern Idaho.

This boreal zone species occurs across Canada and the northern United States to the East Coast. The southern limit of the range is the southern Great Lakes in the Midwest and New England near the Atlantic Coast. Isolated records in the Rocky Mountains and Sierra Nevada might be misidentifications of other species.

This species is a foodplant specialist feeding on Salicaceae including both willows (Salix spp.) and cottonwoods (Populus spp.) including quaking aspen (P. tremuloides).

The flight period of C. briseis is late summer and fall, beginning in mid-July and peaking in September in our region. It is nocturnal and comes to sugar bait and lights.