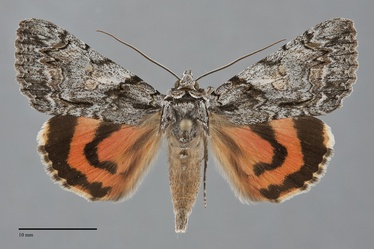 Catocala verrilliana is a small underwing moth (FW length 21 mm) that flies in oak forests during the summer. It has pale blue-gray forewings with black lines and a black dash and black-banded, orange-red hindwings. The forewing margin is scalloped and nearly perpendicular to the trailing margin. The ground color is slightly powdery light blue-gray, whitish in the cell medial to the reniform spot. The terminal area is slightly darker mottled gray, darkest opposite the cell and in the fold.  A black dash is present. The transverse lines are black. The basal line is short, from the costa to the dash. The antemedial line is thickest on the anterior wing, oblique from anteromedial to posterolateral, weakly undulating and drawn toward the base on 1A+2A near the trailing margin. A median line is an oblique dark gray line on the costa. The postmedial line forms two strong teeth toward the outer margin below veins M1 and M2, is evenly scalloped and perpendicular from the lower tooth to the fold where it is sharply drawn toward the base to form a tight hairpin loop or black bar. The subterminal line is double gray filled with light blue-gray, toothed on the anterior wing and smoothly waved on the posterior half. The terminal line is a series of black spots followed by light blue-gray dots between the veins. The fringe is gray with black transverse lines at the ends of the veins. The reniform spot is inconspicuous, a gray crescent. The subreniform spot is large, very light gray to black and filled with white or pale gray or tan. The hindwing is light orange-red with even black median and marginal bands; the former ends bluntly without reaching the inner margin. The hindwing fringe is light yellow to the pink with dark gray to black checkering on the mid-wing. The head and thorax are powdery blue-gray with a dark band posterior to the collar and dark edges on the tegulae. The male antennae are filiform.

This species can usually be identified without difficulty by its small size for the genus, light blue-gray forewing with a black basal dash, and orange-red hindwing ground color. It should only be expected in areas where oaks grow.

Larva is smooth, gray with a pale pink hue, with a mid-dorsal hump-like tubercle and a ventral row of whisker-like hairs below the lateral line.  It is illustrated by Miller & Hammond (2003).

Catocala verrilliana is found in western Oregon and southern Washington in association with oaks, the larval foodplant. It is fairly widespread in Oregon, but appears to be restricted to the Columbia Gorge and the east slope of the Cascades as far north as Yakima County in Washington.

This species is found in the American West, predominantly in the Southwest and along the Pacific Coast. It occurs from central Texas through the Four Corners States to California where it is common throughout most of the state.

This species is a foodplant specialist feeding on oaks (Quercus spp.) in the Fagaceae, and primarily feeds on Oregon white oak (Q. garryana) in the Pacific Northwest.

Adults are on the wing in the summer, with records from late June to early September in the Pacific Northwest.