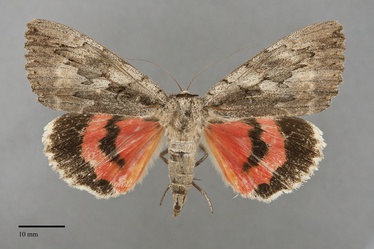 Catocala amatrix, the "sweetheart underwing," is a very large moth (FW length 36 - 39 mm) that has been found in eastern Oregon in our region. It has diffuse black stripes on the base, apex, and the anal angle of its gray-brown forewings. The forewing has a strongly scalloped outer margin. The color is smoothly mottled tan-gray. The posterior margin is bluish. An off-white spot is present medial to the reniform spot. The anterior cell distal to the reniform spot, most of the anterior and mid-subterminal area, and the filling of the subreniform spot are similar pale tan. Two dominant forms exist. One has diffuse black basal, apical, and anal dashes (figured). The other has a broad continuous black stripe from the base to the apex and lacks an anal dash. The basal line is black. The antemedial line is gray across the wing or black on the anterior wing and gray elsewhere, double with filling of the adjacent wing color, very irregular, slightly oblique toward the outer margin on the anterior wing and transverse on the posterior wing. The median line is gray, evident on the anterior wing, oblique toward the outer margin. The postmedial line is black, very sinuous with two long teeth toward the outer margin opposite the cell and a long tooth toward the base above the posterior margin. The subterminal line is light gray with whitish gray filling, evenly serrate across the wing, bent toward the base near the costa and transverse elsewhere. The terminal line is a series of black crescents or lines between the veins. The fringe is tan. The reniform spot is D-shaped with a slightly scalloped lateral margin, black, double with gray filling between the lines and tan-gray to warm brown central filling. The subreniform spot is large, black, with light tan filling. The hindwing is orange-red with black median and marginal bands. The median band is smooth and usually ends before the medial margin. The hindwing fringe is peach-colored with irregular black scalloping on the mid-wing. The head and thorax are tan-gray with black stripes across the collar and along the edges of the tegulae. The male antenna is filiform.

This species is widely distributed in eastern North America, and is particularly common in cottonwood forests along rivers, creeks, and in urban areas throughout the Great Plains.  It may be expanding its distribution westward in similar habitats across southern Idaho and into eastern Oregon.

A single record from our region is from Ontario in Malheur County, Oregon (Richard Worth personal communication 2010).

Catocala amatrix has a predominantly eastern North American distribution, ranging west through the Great Plains. The western limits outside our region are central Montana, Utah, and Arizona. It is found north to southern Canada and southern New England in the East.

This species is a foodplant specialist feeding on Salicaceae, and particularly prefers large cottonwoods (Populus spp.).  The primary foodplant on the Great Plains is eastern cottonwood (P. deltoides), but it may also use black cottonwood (P. trichocarpa) in the Pacific Northwest.

Adults are single brooded and occur in late summer. It is nocturnal and comes to light and sugar bait.