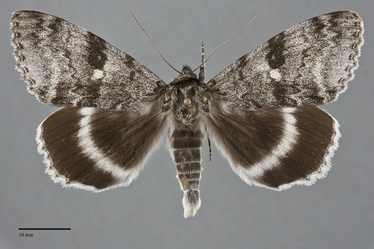 Catocala relicta is a large underwing moth (FW length 34 - 40 mm) that flies in forests throughout most of the Pacific Northwest during late summer and fall. It has a white, cream, or dusty gray forewing with a white-filled subreniform spot and a black hindwing with an even white median band. The outer margin of the forewing is scalloped. The color is white or cream with a light dusting of gray scales to powdery dark gray, usually slightly darker on the posterior wing. The basal line is black or dark gray, often appearing solid gray to the base. The antemedial line is gray, double with wide separation of the two components, filled with cream that is slightly lighter than the adjacent wing. A diffuse wide dark gray median line is straight across the wing through the reniform and subreniform spots, forming the darkest mark. The postmedian line is dark gray followed by white to light gray, often double near the trailing margin, serrate, nearly straight perpendicular to the wing with a slightly convex lateral segment with stronger teeth near the end of the cell and a tight loop toward the base near vein 1A+2A. The subterminal line is powdery gray, double with widely separated components filled with white to pale gray, evenly serrate, undulating with slight lateral convex segment on the anterior forewing areawing and concave segment posteriorly. The terminal line is a series of gray spots or single or double lunules between veins. The fringe is white to light gray, usually slightly lighter than the ground color. The reniform spot is gray, completely dark or with a few light spots, broadly kidney-shaped. The subreniform spot is gray filled with white or cream. The hindwing is appears even black with a curved wide white median band and a thin white stripe near the outer margin. The terminal line is thin gray or a series of gray spots. The hindwing fringe is white. The head and thorax are powdery gray with dark gray barring on the edges of the collar and tegulae. The male antenna is filiform.

This species is the only North American Catocala with white and black hindwings. No other moth in our area is large with a white median line on a black ground.

The type locality of the synonym Catocala elda Behrens is Oregon, Portland.

This species is usually uncommon in our area.  In the Pacific Northwest, it occurs in riparian zones along creeks and rivers at higher elevations in the Cascades, in quaking aspen forests of the Rocky Mountains, and also in riparian cottonwood forests at low elevations west of the Cascades.

Catocala relicta is widespread in forests of the Pacific Northwest, occurring on both sides of the Cascade crest.

This species is widely distributed in North America, occurring everywhere but in the far north and south. The eastern population is found from southern Canada to Maryland , Kentucky, and Illinois. The western range extends from north-central Alberta to northern New Mexico and Arizona. It has been found uncommonly in northern California.

This species is a foodplant specialist feeding on willows (Salix spp.) and cottonwoods (Populus spp.) including both black cottonwood (P. trichocarpa) and quaking aspen (P. tremuloides).

This species is single brooded. Adults appear in late summer or early fall, with Pacific Northwest records from late July to mid October. It is nocturnal and comes to light and sugar baits.