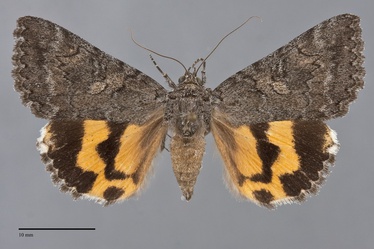 Catocala chelidonia is a rarely collected, small underwing moth (FW length 21 - 23 mm) found in southwestern Oregon. It has gray forewings and yellow-orange hindwings. The forewings are relatively stubby with a pointed apex and scalloped outer margin. The color is dull powdery gray, slightly lighter along the costa and darker in the terminal area. The transverse lines are darker gray with adjacent light gray, opposite the median area in the case of the antemedial and postmedial lines. The basal line is short, near the wing base. The antemedial line is undulating, oriented obliquely across the wing from anteromedial to posterolateral. The median line is gray, diffuse, evident near the costal margin. The postmedial line is serrate with two strong teeth opposite the cell and a notch toward the base on 1A+2A above the trailing margin. The subterminal line is pale gray medially and dark gray laterally, broad, diffuse, slightly waved, angled toward the base near the costal margin and perpendicular to the trailing margin below the anterior cell. The ermnal line is thin and black. The fringe is gray with faint longitudinal striation. The hindwing is yellow-orange with black markings. The median line is irregular in thickness, and the marginal band is divided near the anal angle, resulting in a black spot near the anal angle. The head and thorax are similar gray to the forewings. The antenna is simple in both sexes.

This is our only Catocala with a light yellow-orange hindwing. It should only be expected in southwestern Oregon in the Pacific Northwest.

Catocala chelidonia is found in mixed hardwood forests with oak and tanoak, and dry oak savanna at low to middle elevations.

Catocala chelidonia has been collected once in Josephine County, Oregon.

This species is found in western California to the border with Mexico. The range extends east through Arizona and southern Utah to central New Mexico.

This species is probably a foodplant specialist feeding on oaks (Fagaceae).

Adults are on the wing in late summer. They are nocturnal and come to light and sugar baits.