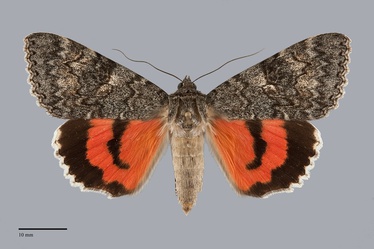 Catocala californica is a moderately large underwing moth (FW length 30 - 36 mm) that flies in the drier portions of the Northwest in late summer and fall. Its forewings are fairly uniform dark gray to brown-gray, and its hindwings are dark red-and-black banded. The outer margin of the forewing is scalloped. The ground color is powdery dark gray, often with a slight blue or brown cast. The lightest area on the forewing is medial to the reniform spot, with other pale areas lateral to the reniform spot in the mid-subterminal area. The basal and antemedial lines are dark gray, double with filling that is slightly lighter than the ground color. The basal line is short, near the base. The antemedial line is moderately irregular, oriented oblique from anteromedial to posterolateral. The median line is dark gray, diffuse, evident on the anterior wing surrounding the reniform spot. The postmedial line is black medially and similar to the filling of the antemedial line laterally, waved with two strong teeth toward the outer margin opposite the cell and a single long tooth toward the base above the posterior margin. The subterminal line is gray, diffuse, double with pale gray filling, offset toward the base near the costa and parallel to the outer margin below the cell. The terminal line is a series of black spots followed by tan to gray lighter spots between the veins. The fringe is slightly lighter than the ground with longitudinal striations and a pale edge. The reniform spot is dark gray with peripheral filling of the ground color and central filling of dark gray, D-shaped with a dentate lateral margin, usually poorly defined against the adjacent dark median line. The large subreniform spot is dark gray filled with powdery light gray usually slightly darker than the pale spot anterior to it. The hindwing is red with black median and marginal bands. The median band usually ends bluntly before reaching the inner margin. The hindwing fringe is white with a pink to peach inner line on the anterior wing and gray spots or lines at the ends of the veins. The head and thorax are powdery dark brownish-gray with faint darker transverse lines across the collar.

Catocala californica is closely related to Catocala briseis and some populations in Washington and Oregon appear to be intermediate.  We suspect strongly that C. californica might best be treated as subspecies.

This species is found in the warmer and drier climates east of the Cascades. It occurs near streams in foothill and steppe regions.

Catocala californica is found east of the Cascade crest  as far north as southern British Columbia and western Montana.

This species is a western species and has a limited range outside of the Northwest. It has also been found in extreme southwestern Alberta and in the eastern parts of California.

This species feeds on aspen (Populus tremuloides) and willows (Salix spp.) in the Salicaceae.

This species flies during the summer and early fall. Records from our region are mostly from July through September. This species is nocturnal and is attracted to lights and sugar bait.