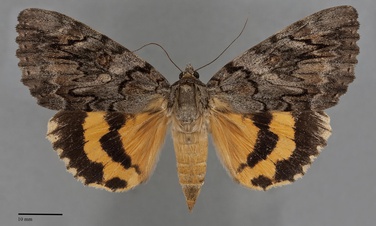 Catocala piatrix is a very large moth (FW length 37–40 mm)—a giant among noctuids—that occurs in southwestern Oregon and flies during late summer. It has a mottled brown forewing and dull orange hindwing with black semicircular bands. The forewing is broad and triangular with a scalloped outer margin. It is mottled slightly blue-gray, gray, and brown, lightest gray as a broad band that extends obliquely from anteromedial to posterolateral from the costa between antemedial and medial lines through the subreniform spot and the loop of the postmedial line that forms this spot. The transverse lines are black. The basal line is waved, excurved, present on the anterior half of the forewing. The antemedial line is thick and strongly sinuous, oriented obliquely from anteromedial to posterolateral. The postmedial line is unevenly thick, strongest lateral to the reniform spot and posterior to the subreniform spot, is drawn strongly toward the base near the costa, is convex and very strongly toothed between the veins near the reniform spot, is drawn medially posterior to the reniform spot as a long loop that forms the subreniform spot, and is strongly undulating to the trailing margin. The median line is diffuse, gray, evident between the costa and reniform spot. The subterminal line is diffuse, gray bordered on the medial side by light gray, evenly sawtoothed with on and between the veins. The terminal line black bordered laterally by tan, only evident between the veins. The fringe is dark gray, similar to the color of the adjacent terminal area. The reniform spot is dark gray, double, ovoid, filled with gray and brown. The subreniform spot is light gray. The orbicular and claviform spots are absent. The hindwing is yellow orange with black medial and marginal bands. The medial band is offset abruptly on vein M2 at the posterior cell with the posterior portion more lateral than the anterior part and tapers to a point near the medial margin. The fringe is pale orange. The head and thorax are speckled dark gray, with diffuse dark stripes on the collar. The abdomen is tan with a strong orange tint similar to that of the hindwing. The male antenna is filiform.

This species and Catocala neogama are the only large underwing moths (Catocala species) with orange and black hindwings. Catocala piatrix tends to be the larger of the two species and has a broader forewing. It can be differentiated from C. neogama by the presence of a broad oblique lighter gray bar in the medial area from the costa through the subreniform spot and the absence of a black basal dash. As of 2016 the Pacific Northwest ranges of these species were not known to overlap as C. piatrix occurs in southwestern Oregon and C. neogama occurs east of the Cascade Range; however, they are broadly sympatric in other parts of North America.

Catocala piatrix has been found in mixed forest in the Pacific Northwest. It is only known from two photographs in our region.

The range of this species in the Pacific Northwest is southwestern Oregon in Jackson and Josephine Counties.

Catocala piatrix is widespread in eastern north America south of southern Ontario and central Minnesota. The range is more limited in the West. It extends from the central and southern Great Plains through Arizona to most of California. The Oregon records are the most northerly records from the West Coast.

The adult moths fly during late summer. The two Pacific Northwest records are from mid-August.