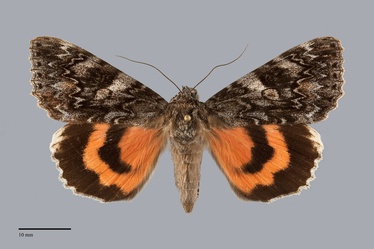 Catocala allusa is a large moth, medium-sized for underwing moths (FW length 30–31 mm), that flies west of the Cascades during late summer and fall. Its forewings are mottled dark brownish gray with a prominent black postmedial line, and its hindwing are banded red and black. The forewing margin is scalloped. The color is mottled dark gray with a slight blue tint in the median area and brown tint on the base and distal wing. The median area medial to the reniform spot is palest gray, with less contrasting pale areas distal to the reniform spot and in the mid-subterminal area. Diffuse black shading is present in terminal area below the apex and above the anal angle, and sometimes across the median area in the fold. The basal line is black, limited to the costa and inconspicuous. The antemedial line is double, thick black with inner and outer components of equal prominence or slightly darker outer component, strongly sinuous and oriented obliquely toward the anal angle from the costal origin. The median line is diffuse black on the costa and surrounding the reniform spot. The postmedial line is smooth black, double, usually with much stronger inner component, smoothly toothed with two large teeth opposite the cell and similar teeth in the fold. The line forms an open loop to the subreniform spot and has a strong horizontal component in the lower fold. The subterminal line is dark gray, double filled with the color of the lighter gray median area except paler gray near the costa, evenly zigzag across the wing, parallel to the oblique anterior postmedial line near the costa and to the outer margin below the cell. The terminal line is a series of black spots. The fringe is dark gray with longitudinal striations. The reniform spot is dark gray, smudged and often blended beyond recognition to the surrounding median line, D-shaped with an irregular lateral border. The subreniform spot is filled with pale gray that is slightly darker than the adjacent pale medial cell. The hindwing is orange-red with black median and marginal bands. The median band ends bluntly short of the inner margin. The hindwing fringe is white to pale yellow with an inner pink to peach flush anteriorly and gray spots at the base at the ends of the veins. The head and thorax are dark gray with darker gray transverse lines across the collar and along the edges of the tegulae. The male antenna is filiform.

This species can usually be recognized from other Catocala species by its medium size for the genus, mottled dark brownish gray forewing with very dark smudge at the reniform spot and black sinuous postmedial line that is strong at the connection to the subreniform spot, and the orange-red hindwing color. It is most similar to Catocala californica, which usually occurs further east in our region. C. californica has a more homogeneous forewing with less conspicous dark lines and a less orange hindwing. Catocala semirelicta occurs with C. allusa, is similar in size, is darker blackish gray without brownish casts, and has stronger contrast between the ground color and the paler whitish areas on the forewing. C. semirelicta typically has a pale blue subterminal line unlike the light gray line in C. allusa.

The taxon allusa was relegated to a subspecies of Catocala faustina by Gall & Hawks (2010) based on sympatry in the Northwest and similar larvae. We treat allusa and faustina as separate taxa—a contrarian and potentially incorrect view—because material in PNW collections demonstrates little intergradation between dark west-side specimens (=allusa) and pale interior ones (=faustina). The hindwing of C. allusa is more orange than the red one of C. faustina despite the fact that C. allusa is a much darker moth otherwise.

The type locality of Catocala allusa Hulst is Washington Territory.

This species is narrowly limited to riparian cottonwood forests along rivers and creeks at low elevations west of the Cascades, extending to urban areas.  It is often common to abundant in this habitat.

Catocala allusa is found in the western Pacific Northwest as far north as southwestern British Columbia. It does not occur east of the Cascade summit.

This species is found in western California to the south of our region.

This species is a foodplant specialist feeding on Salicaceae, including both willows (Salix spp.) and cottonwoods (Populus spp.), and appears to prefer black cottonwood (P. trichocarpa) in western Oregon.