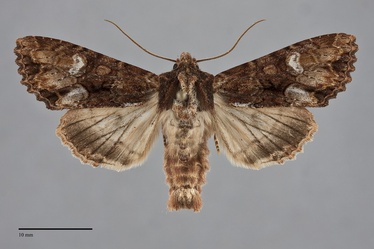 Apamea albina is a large Apamea species (FW length of 20–23 mm) that is restricted to the Siskiyou Mountains in southwestern Oregon in our region and flies during late spring and early summer. It has red-brown forewings marked with a whitish reniform spot, and a blue-gray patch near the anal angle that is traversed by a triangular black smudge. The forewing margin is scalloped. It is mottled reddish brown, darkest in the median area and lightest in the subterminal area and near the apex in the terminal area. The mid and posterior subterminal area is blue-gray, brightest near the trailing margin. A thin line of similar gray is present near the wing base along the trailing margin in some specimens. A black line connects the antemedial and postmedial lines in the fold. Smudgy triangular patches of black scales are present at the margin opposite the reniform spot and at the anal angle; these are traversed by the subterminal line. The basal, antemedial, and postmedial lines are dark, double, and filled with the ground color. The postmedial line is irregular and scalloped, strongly drawn toward the margin near the reniform spot and toward the base in the fold where the black inner component is strong and fused to the median black line. The sinuous brown subterminal line is complete and forms a W-mark on veins M3 and CuA1. The brown orbicular spot is faint, but the large reniform spot is filled with whitish gray scales and is prominent. The claviform spot is small and obscured by the adjacent black line. The hindwing is light yellow-gray with charcoal postmedial line, marginal band, and veins. The head and thorax are dark brown with a thin black transverse line across the collar.

This species is narrowly endemic to dry, rocky, serpentine habitats in open, mixed hardwood-conifer forests or open oak savanna at low elevations in southwest Oregon and northwest California.  It is usually rare.

Apamea albina has only been found in the Siskiyou Mountains of southwestern Oregon in our region.

The range of this species extends south to southwestern California.

Adults fly relatively early in the year. Our records are from mid-May to mid-June. It is nocturnal and comes to lights.