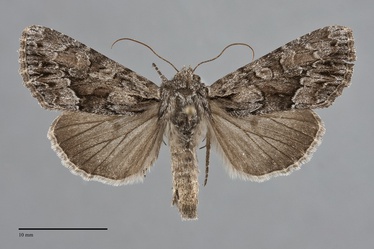 Apamea centralis is a medium-sized moth (FW length 16–20 mm) that flies in montane forests during the summer. It has a mottled, brown-tinted, gray forewing with a darker median area and a complex pattern that includes a black basal dash, median bar, and strong W-mark along the outer margin. The ground color is mottled medium-dark gray, often with a brown tint on the mid-median area. The median area below the cell and in the cell between the spots is slightly darker. The terminal area is mottled darker gray opposite the cell and in the fold, with thick black veins on the mid-wing, and a light gray apex. The veins in the subterminal area and proximal CuA2 are usually dark. A thin black dash is present and a bar-like black area is often present in the fold across the median area. The transverse lines are gray to black, often with black components abutting to the median area and gray elsewhere, filled with slightly lighter gray than the ground color. The basal line is limited to spots on the costa. The antemedial line is excuved with apex in the fold, drawn inward on the veins and strongly incurved on the posterior margin. The median line is gray, diffuse, weak to strong, bent 90° below the reniform spot. The postmedial line is scalloped, widely arched around the end of the cell and then strongly angled toward the base with a strong straight black segment in the fold. The subterminal line is pale gray, irregular with a slightly offset below the costa and a strong W-mark to the margin on veins M3 and CuA1. It is preceded by strong black wedges and a gray shade near this mark. The terminal line is a series of black lunules or triangles. The fringe is checkered light and dark gray. The orbicular is oval, strongly outlined in gray to black on the anterior and posterior sides, filled with light gray and a very faint central ocellus. The reniform spot is dark gray, black on the medial side, large and kidney shaped, most strongly outlined medially, filled with light gray to light tan-gray and a dark gray spot at the lower end. The claviform spot is moderately large, often incorporated into the black bar in the fold. The hindwing is medium gray with darker gray thin discal spot, veins, and terminal line. The hindwing fringe is two-toned gray. The head and thorax are gray and tan-gray with black lines across the mid-collar and near the edges of the tegulae. The male antenna is bead-like.

This species can usually be recognized by its mottled medium gray color, dark median dash or bar, light-filled spots, and streaked distal wing with a strong W-mark and adjacent wedges and dark veins, especially in its mountain forest habitat. It is closest in appearance to Apamea commoda, especially subspecies A. c. parcata, which is is similar in darkness and gray. Compared to A. c. parcata, specimens of A. centralis have more contrasting black markings, are blue-gray rather than tan-gray in color, and are more likely to have a thick median bar. A. c. parcata flies at lower elevations and prefers drier open habitats than the forests in which A. centralis occurs. There is a possible blend zone between these taxa in eastern Washington and eastern Oregon where some specimens are difficult to assign to one taxon or the other.

This species is geographically variable. The populations from south of our region in California are lighter tan-gray with greater contrast between the brown, gray, or black median area with the adjacent portions of the wing and the light filling of the spots.

This species occurs in open, dry ponderosa pine forests along the east slope of the Cascades and in the Rocky Mountain region. It is found in open forests at higher elevations in the Cascades and on rocky, barren ridgetops in the Siskiyou Mountain region of southwestern Oregon. It is predominantly a middle to high-elevation species, but it occurs in dry oak savanna at low elevations in southwestern Oregon. It is often common in the proper habitat.

This species has a limited range near the Pacific Coast of North America. It extends south to southern California. Apamea centralis has been collected in extreme southwestern Alberta but does not occur elsewhere in the Rocky Mountains.

Adults of A. centralis fly from June through August in our region. They are nocturnal and come to lights.