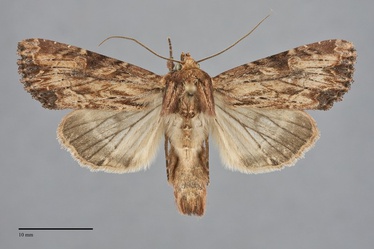 Apamea lignicolora is a medium-sized to large moth (FW length 19–21 mm) that has been found in far eastern Idaho and flies during the summer. It has a streaky medium-brown forewing with a dark brown terminal area that is divided into two by a strong W-mark of the subterminal line. The ground color is mottled warm ochre-tan to moderately-dark orange-brown, darkest on the costa, in the cell, on the posterior base, and in the anterior and distal subterminal area. The terminal area is darker mottled brown and purplish gray except at the apex, divided into two similar-size patches that are centered opposite the cell and in the fold. A streaked pattern is accentuated by partially dark veins. A dark brown line is usually present at the base near the posterior margin. The basal, antemedial, and postmedial lines are uneven light to dark brown, double with filling of the ground color. The basal line is only evident on the costa. The antemedial line is always evident on the costa but variable elsewhere, usually evident in the cell and fold, with two dark spots medial to the line on vein 1A+2A. The median line is brown, diffuse, evident from the costa through the cell. The postmedial line is variable, often faint except for paired brown spots on the veins at the tips of the teeth, broadly excurved around the cell and strongly angled toward the base posterior to CuA2. The subterminal line is pale tan, irregular with a prominent W-mark with long pointed teeth to the margin on M3 and CuA1. It is preceded by a brown shade that often forms brown wedges on the mid-wing. The terminal line is a series of dark gray spots between the veins. The fringe is dark brown-gray with tan transverse lines across it at the tips of the veins. The orbicular and reniform spots are similar, outlined in brown with filling of pale tan peripherally and brown centrally. The orbicular spot is an elongate oval. The reniform spot is an upright oval or weak hourglass shape, sometimes with a short extension toward the base from the medial lower portion. A small purplish gray spot is present at the lower end. The claviform spot is usually absent, outlined in brown when present. The hindwing is yellowish gray with darker gray marginal area, discal spot, vens, and incomplete terminal line. The hindwing fringe is pale ochre with a red-brown base. The head and thorax are warm orange brown with darker brown lines near the edges of the collar and tegulae. The male antenna is bead-like.

This species can be identified in its limited range in the eastern part of the Northwest by its streaked brown color with darker areas on the distal wing. It is similar to Apamea atriclava and Apamea siskiyou, but both of these species are found west of the Cascades and are easily separated by locality. The species most likely to be confused with A. lignicolora is Apamea antennata. Where A. lignicolora and A. antennata co-occur, A. antennata is similar in size but tends to be much redder in color. It is more colorful, with areas of blue-gray on the posterior and distal wing, and has a black basal dash that A. lignicolora lacks. Apamea cuculliformis occurs in southern Idaho, although not near the eastern border, and is similar in color to A. lignicolora. The dark brown color forms a continuous stripe across the posterior margin of its wing that is unique in Apamea.

This species is common and widely distributed in moist hardwood forests throughout eastern North America. The habitat in eastern Idaho is unknown.

Apamea lignicolora has only been found in far eastern Idaho in the Pacific Northwest (Mikkola et al. 2009).

This species is predominantly distributed to the east of our region. The range extends to southern Quebec and Nova Scotia from the southern and central Canadian Prairie Provinces. The range extends south in the Rocky Mountains through Colorado to northern New Mexico and central Arizona. Further east the southern limit of the range is Tennessee, northern Georgia in the Appalachian Mountains, and New Jersey near the Altantic Coast.

The flight season of this moth is the summer, most commonly from June until August, with earlier records in May in some parts of the East. The flight period in Idaho is unknown.