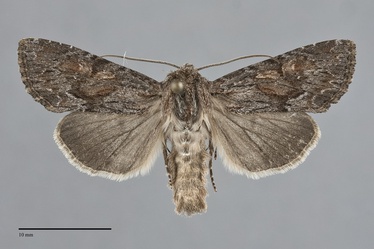 Apamea commoda is a medium-sized moth (FW length 16–20 mm) with three distinctive subspecies in our area that range in appearance from streaky tan-gray to dark red-brown. The ground color of the nominate subspecies A. c. commoda, found in eastern and central British Columbia in the Northwest, ranges from dark red-brown to dark brown, sometimes slightly lighter distal to the reniform spot and at the apex but even elsewhere. The most widespread subspecies in our area, A. c. parcata, is mottled medium-dark and light ash gray with variable tan suffusion that is strongest in the median area anterior to the median dash and distal to the reniform spot. The wing base and subterminal area are suffused with lighter gray in some specimens. The terminal area is darker gray. Most specimens have dark veins on the distal wing. Specimens in southeastern Oregon and southern Idaho are mottled paler tan and gray with a streakier appearance due to greater contrast between black veins and the ground color and light gray along the veins. These resemble subspecies A. c. striolata, although they are not strictly in the range of this subspecies as defined in Mikkola et al. (2009). The terminal area is gray. Black basal and gray to black median dashes are often present in all forms, with a similar dark gray to black mark along the posterior margin basal to the antemedial line in some pale specimens. The transverse lines are variable gray to black, usually with the darkest components abutting to the median area and lighter elsewhere, filled with light gray that is palest in the postmedial line in the fold. The basal line is evident on the costa. The antemedial line is slanted toward the outer margin from the costa, excurved with apex in the fold, drawn inward on the veins and strongly incurved on the posterior margin. The median line is dark gray, diffuse, variable from absent to strong, bent below the reniform. The postmedial line is scalloped, variable in prominent on the anterior wing usually strong posteriorly, especially in the fold. It is variable in course, sometimes smoothly curved around the end of the cell but often with several abrupt bends, including at each end of the strong segment in the fold which is more steeply angled toward the base than the adjacent portions of the line. The subterminal line is pale, luteous in the nominate subspecies and light gray in the other subspecies, weak except on the mid-wing where it forms a strongly pointed W-mark to the margin on veins M3 and CuA1. It is preceded by strong black wedges near this mark. These features are relatively weak in A. c. commoda and increase in prominence in populations from further south where these marks add to the streaked look of the wing. The terminal line is a series of black lunules or triangles. The fringe is concolorous with the rest of the wing with pale spots at the ends of the veins in A. c. commoda and checkered light and dark gray in the other populations. The orbicular and reniform spots are mostly evident as peripheral luteous filling in A. c. commoda; outlined in gray to black with ground color and some lighter gray filling in the other populations. The orbicular spot is oval to an elongate bar. The reniform spot is kidney-shaped to weakly hourglass-shaped, most strongly outlined medially and posteriorly. The claviform spot is absent or weakly evident at the base of the median dash. The hindwing of all forms is tan-gray with darker gray diffuse marginal band, discal spot, veins, variably-present postmedial line, and terminal line. The hindwing fringe is variable, darker in dark specimens, from nearly white, white with a darker base, or gray. The head and thorax match the forewing color, often with a slightly lighter base of the collar and thin black line across the mid-collar. The male antenna is bead-like.

The dark red-brown nominate subspecies can usually be identified by its color in combination with yellowish scales in the periphery of the forewing spots and thin gray filling of the lines. Apamea cogitata is brighter red and has more pale filling of its reniform spot. Apamea plutonia is dark brown, nearly black, and lacks significant pale scales in its spots and lines. It also has a characteristic black mark in the posterior subterminal area that A. c. commoda lacks.

The lighter, grayer, and streakier populations of A. commoda from elsewhere in our region are easily confused with Apamea cinefacta and Apamea centralis. Apamea cinefacta has a slight olive cast to its wing with more light blue-gray on the wing base and in the subterminal area than in A. c. parcata. Its orbicular spot is an elongate oval and is usually filled with similar blue-gray as these areas. It typically flies in late spring in low-elevation open forests whereas A. commoda flies slightly later during the summer in the same habitats but also at higher elevations. Apamea centralis is mostly restricted to the Cascade Mountains where it occurs at middle to high elevations during mid-summer. It is slightly larger than A. commoda and has a more strongly mottled dark blue-gray and brown color with more strongly defined pattern than A. commoda.

The Pacific Northwest populations of A. commoda are geographically variable and are separated into two, possibly three, subspecies that exhibit clinal variation as described above. The dark nominate subspecies occurs in British Columbia as far south as the Cariboo Plateau in the south-central part of the province. The gray and moderately streaky subspecies A. c. parcata is widespread elsewhere in our region, with a trend toward increasing streakiness typical of subspecies A. c. striolata of the southern Rocky Mountains in southeastern Oregon and southern Idaho.

This species is widely distributed in open forests and grasslands across Canada and further south in the Rocky Mountains.  In the Pacific Northwest, it occurs in dry conifer forests and grassy meadows at low to middle elevations. It is most frequently found in dry, open ponderosa pine forests and juniper woodlands. It occurs in juniper and aspen parkland in the higher mountains of the Basin and range province, including the Steens Mountains of southeastern Oregon.

Apamea commoda is found throughout much of the Pacific Northwest east of the Cascade and Coast Mountains. It occurs as far north as the Atlin and the Peace River region of northern British Columbia. It is widespread in forests in and surrounding the dry steppes, but it is absent from the central portions of these basins. Idaho populations of this species occur in the north and southeast.

This species has a wide distribution in the boreal forests of North America from Alaska, Yukon Territory, and Northwest Territories to Newfoundland. The southern limit of its range in the East is the northern Great Lakes region and northern New England. It is widespread in the northern Great Plains. The distribution extends south in the Rocky Mountains to Utah, Colorado, and the northern parts of Arizona and New Mexico.

Adults fly from early June to early August in the Pacific Northwest. They are nocturnal and come to lights.