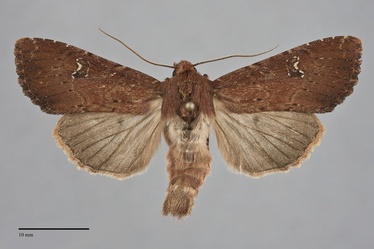 Apamea scoparia is a large, light brick-red moth (FW length 20–24 mm) that flies in mountain forests during the summer. It has a broken pale gray outline to the reniform spot, and the other markings are faint. The forewing appears long and has a weakly scalloped outer margin. It is nearly uniform brick-red, slightly darker and grayer on the costa and near the outer margin. The posterior median area is light orange-brown in some specimens. The antemedial and postmedial lines are slightly darker than the ground color or evident as pale lines, toothed with dark gray lines at the tips of the teeth, variably absent or evident as any combination of red-brown, lighter tan, and gray spots. When visible the antemedial line is zigzag on the veins and angled toward the outer margin from the costa. The postmedial line is strongly toothed, smoothly excurved around the reniform spot, and then nearly straight at an angle toward the base to the posterior margin. The subterminal line is ochre, incomplete with an angled line on the costa and a few light spots to the mid-wing. The terminal line is variable, absent, a thin line, or series of triangles between the veins. The fringe is dark brick with lighter spots in the base at the ends of the veins. The orbicular spot is oval, very faint or absent, usually a few light scales. The reniform spot is kidney-shaped with longer lower portion, outlined with broken light gray or pale ochre scales and filled with red-gray lightly sprinkled with lighter scales. The claviform spot is absent. The hindwing is medium tan-gray darkening to gray at the margin with gray thin discal spot, veins, and dark terminal line. The hindwing fringe is light tan with strong pink tint. The head and thorax are dark brick red. The male antenna is bead-like.

This moth can usually be identified without difficulty by its large size, brick-red color, and pale reniform outline. It is most similar to Apamea cogitata, a smaller species that is slightly darker red with more extensive ochre filling inside the reniform spot, less evident postmedial line, and more complete light subterminal line. Euxoa shasta is a large brick-red species that flies in similar habitats as A. scoparia. It lacks a pale outline of the reniform spot and has a pure gray hindwing without brown tones or pink fringe.

This species is widely distributed in open, moist forests of quaking aspen and mixed conifer forests at middle to high elevations in the Cascades and Rocky Mountain regions, extending into ponderosa pine forests at middle elevations.  It can be moderately common in the proper habitat, but is usually rare and sporadic in many areas.

Apamea scoparia is widespread in boreal forests in southern British Columbia, and has also been recorded from the northeastern part of the province suggesting that it is likely to be more widespread. The range extends south through the Cascade Range, forests of northern Washington, and the mountains of Idaho. It also occurs on isolated ranges in the Basin and Range provinces of southern Oregon and Idaho.

This species is widespread in the mountains of western North America, occurring to the Transverse Ranges of southern California, northern Arizona, and northern New Mexico. It ranges east through boreal Canada and the northern continental United States to Labrador, New England, and northern New York.

This species flies during the summer, sometimes appearing as early as late May but usually peaking in late June and July. It is nocturnal and comes to lights.