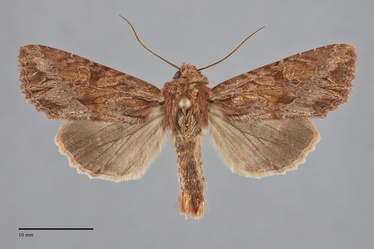 Apamea antennata is a large Apamea (FW length 18–22 mm) that flies in dry forests and parklands throughout all but the most densely forested and open steppe habitats in our area. It has variable orange-brown, red-brown, or dark brown forewings with grayish or pale violet shading in the posterior margin and subterminal area. The outer margin of the forewing is lightly scalloped. The color is slightly mottled medium-dark warm brown with an orange to slight red tint. The posterior wing and much or the subterminal area are most often light gray with a violet to silver hue, reduced in some west-side specimens. The terminal area is darker gray with diffuse stripes of red-brown or the gray between the veins in many specimens. A black basal dash is present, with a similar black mark along the posterior margin near the base. The basal, antemedial, and postmedial lines are red-brown, partially double and filled with the ground color and the light gray color. The basal line is a pair of spots on the costa. The antemedial line is usually present across the wing but is darkest on the costa, in the cell, and in the fold, is angled toward the outer margin with teeth toward the base on the veins. The median line is dark brown to gray-brown, diffuse, angled toward the outer margin from the costa to below the reniform spot and then parallel to the postmedial line to the posterior margin. The postmedial line is scalloped, often with spots on the veins distal to the teeth, weak on the anterior wing where it curves evenly around the reniform spot, then strongly angled toward the base to near the antemedial line. A short segment in the fold is prominently black and light gray. The subterminal line is pale red-tan, thin, very uneven with a strong but slightly diffuse W-mark on M3 and Cu1 that reaches the outer margin. It is preceded by a thin red-brown shade, wider and often grayer in the fold, and two dark wedges at the anterior W-mark. The terminal line is a series of dark triangles that accentuate the saw-tooth pattern or the margin. The fringe is dark brown to gray-brown with lighter transverse lines at the ends of the veins. The orbicular and reniform spots are partially outlined in black or red-brown and filled with the ground color or lighter yellow-brown. The orbicular spot is an elongate oval, nearly touching the reniform spot. The reniform spot is irregularly kidney-shaped or hourglass-shaped, weakly outlined on the lateral side, filled with darker gray inferiorly. The claviform spot is variable, either black or gray. A diffuse black shade extends from the spot to the postmedial line in some spots. The hindwing is gray-tan with extensive gray suffusion and a pink tine, slightly darker gray veins, discal spot, and terminal line. The hindwing fringe is pale tan with a strong rose tint. The head and thorax are red-brown to reddish gray-brown with darker brown lines near the edges of the collar and tegulae. The male antenna is bead-like.

This species can usually be recognized by its large size, mottled warm medium brown color with violet to silver gray along the posterior wing and in the subterminal area. It is similar to many other Apamea species in our region. It is most likely to be confused with Apamea atriclava and Apamea siskiyou west of the Cascade Mountains and Apamea sora, Apamea tahoeensis, and Apamea auranticolor in the high Cascades and further east.

The two similar west-side species differ in color from A. antennata, with Apamea atriclava being brighter orange-brown and Apamea siskiyou darker brown or gray-brown. Both of these species lack the pale gray shading that is present in most specimens of A. antennata. Individuals of A. antennata that lack this gray and light specimens of A. siskiyou are particularly difficult to differentiate, a problem that is made worse by the fact that they occur together in native grasslands. In general, A. antennata is larger, lacks a light yellow-brown inner outline of the reniform spot, and has a lighter hindwing that often has a reddish tone. Differences in the length of the clasper of the male valve can be observed by brushing the scales from them. That of A. antennata is shorter and narrower than that of A. siskiyou, not extending beyond the margin of the cucullus.

The other three species are allopatric so that only one species occurs with A. antennata at any location. All are smaller in size and have more mottled forewings with warm brown median areas, lighter yellowish filling of the spots, and more mottled gray and black bases and distal wings. Occasional specimens of all three species are more even red or orange-brown. These can generally be associated with more typical specimens of their species. On the ventral side they are darker and grayer than A. antennata which tends to have a light pink flush on the underside

This species is common and widely distributed in a variety of forested habitats east of the Cascades crest, occurring in dry, open ponderosa pine forests to wetter Douglas fir or subalpine fir forests. It is most common at middle elevations. Apamea antennata is rare at low elevations west of the Cascades, and appears to be limited to dry, open oak savanna and native upland prairies. It occurs in sloping Festuca grasslands near the Gulf of Georgia in northwestern Washington and southwestern British Columbia.

Apamea antennata is widespread in forests east of the summits of the Cascade and Coast Mountains as far north as southern British Columbia. The distribution is more limited west of the Cascades. It is found in the Siskiyou Mountains and Willamette Valley of western Oregon, near Puget Sound and the Gulf of Georgia in western Washington, and near the Gulf of Georgia in southwestern British Columbia.

Apamea antennata is predominantly distributed near the West Coast, occurring in California to the border with Mexico to the south of our region. Further inland it occurs in the northern Rocky Mountain region to southwestern Idaho and northern Utah. It is replaced by the closely related species Apamea atrosuffusa further south in the Rocky Mountains.

No information is presently available regarding the larval biology of this species, but it is probably a soil-surface feeding cutworm that feeds on native bunchgrasses in the Poaceae based upon the habitat.

Adults fly during late spring and summer. Records from the Pacific Northwest extend from late May to early August. This species is nocturnal and comes to lights.