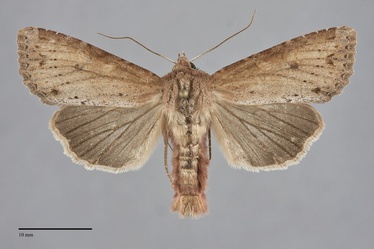 Apamea alia is medium-sized moth (FW length 17–20 mm) that flies in forested parts of the Northwest during the summer. It has light to medium blue-gray forewings suffused with rusty red-brown on the anterior wing, darkest on the costa. The forewing an odd pale gray with a slight reddish tint in most Pacific Northwest specimens, sometimes darker blue-gray like most other North American populations. The costa except for the apex is red-brown, fading throught the cell. The terminal area of some specimens is powdery darker gray with dark veins. A dark blackish gray spot is found medial to the subterminal line near the anal angle, and some specimens smaller additional spots precede the subterminal line on the mid-wing. The antemedial and postmedial lines are double, rusty on the anterior wing and gray elsewhere, and usually very faint except on the costa where they produce an indistinct pattern. Rows of paired dark gray spots on the veins medial to the antemedial line and lateral to the postmedial line are more prominent than the lines themselves. The orbicular and reniform spots are outlined in pale red-brown, and filled with the ground color except that the entire reniform spot or the lower half is usually filled with dark gray. The claviform spot is absent. The hindwing is medium brownish gray, darker gray toward the margin, with barely darker spot and veins. The hindwing fringe is light to dark gray with a pink tint in most specimens. The head and thorax are gray, usually with a reddish tint, and match the forewing ground color. The male antenna is filiform.

This species can be identified by the combination of the blue-gray ground color, gradually darker red-brown costa, the dark spot near the anal angle, and paired spots marking the course of the transverse lines. It is unlikely to be confused with other species in our area. Some specimens of Trichordestra lilacina, a member of the tribe Hadenini that has fine hairs on its eyes unlike Apamea species, can have similar color on the wing as A. alia. Its costa is similar to the rest of the wing in color, not strongly red-brown, and its lines are better defined than those of A. alia.

Apamea alia is widespread in the Pacific Northwest. It is found in southern British Columbia and north along the Pacific Coast to the Alaska Panhandle and southwestern Yukon Territory. Further south the range extends south through western Washington and Oregon to the Siskiyou Mountains. It also occurs east of the mountains along the east slope of the Cascades, in eastern Washington and adjacent Idaho Panhandle, and in the Snake River Plain of southern Idaho.

This species is distributed widely across North America, occurring across the Continent from Yukon Territory, and southern Northwest Territories to Newfoundland in the north. The southern limits of its range are Pennsylvania and New Jersey along the Atlantic Coast, the Great Lakes in the Midwest, and central Utah and northern New Mexico in the Rocky Mountains.

Adults are found from early May to late August, although most specimens are collected prior to mid-July. They are nocturnal and come to lights.