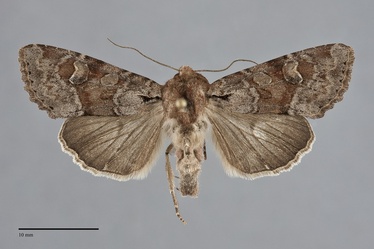 Apamea sordens is a medium-sized, clay-colored moth (FW length 15–20 mm) that flies in the northern and eastern parts of the Northwest during late spring and summer. It can be found with or without a rusty red-brown median area, and has a forked black basal dash and large pale-filled forewing spots. The forewing margin is slightly scalloped. The color is pale tan-gray with variable rusty red-brown that is most consistently present in the median area and slight gray mottling. The terminal area is similar to the rest of the wing, slightly lighter blue-gray at the apex in some specimens. A black basal dash appear to fork distally in most specimens. The lines are dark gray or black bordered by a pale shade of the ground color. The basal line is straight or slightly curved from the costa to the dash. The antemedial line is excurved and smooth to wavy, touching the orbicular spot. The medial line is gray or red-brown, diffuse but evident. The postmedial line is weakly scalloped to toothed, touches the anterior and posterior reniform spot, is nearly straight lateral to the spot and slanted toward the base below the spot. The subterminal line is pale, most consistent on the anterior wing, undulating with a weak W-mark on the mid-wing that does not reach the outer margin. A slight preceding gray or red-brown shade is usually evident. Black triangles between veins constitutes the terminal line. The fringe is slightly reddish gray. The orbicular and reniform spots are partially outlined in black, moderately large, and filled with the ground color. The former is round, often open anteriorly. The latter is moderately large, kidney-shaped, and often has a whitish inner component that is strongest laterally. The claviform spot is dark gray to black, small. The hindwing is pale tan-gray, gradually darker gray toward the margin, with gray discal spot, veins, faint postmedial line, and dark terminal line. The hindwing fringe is off-white with variable amounts of gray at the base. The head and thorax are gray-tan to rusty. Weak tufts are present on several abdominal segments. The male antenna is beaded.

This moth and Apamea digitula can be distinguished form other moths by their pale pale clay color with rusty and black markings that include a forked basal dash and large pale-filled spots. However, they can only be distinguished from each other by the structure of the male genitalia or by mitochondrial DNA. The digitus of the male valve is longer in A. sordens, extending below the ventral cucullus whereas it is shorter in A. digitula without reaching the margin of the cucullus. This can be observed after brushing the scales from the valve with a fine brush. In practice, only specimens from the area where the ranges of these species approach each other at the Columbia River need to be examined critically since they are allopatric.

This species is found in a variety of moist forest and grassland habitats throughout much of North America. It is found in open forests and mixed grasslands and forests in the Pacific Northwest, occurring at low to middle elevations. It is frequent in mixed hardwood-conifer forests and ponderosa pine forests. Apamea sordens has been found in agricultural areas in the Columbia Basin, although it is not found otherwise in dry sagebrush steppe regions. It is moderately common in our region.

In the Pacific Northwest, this species occurs throughout most of British Columbia, Idaho, and Washington. It is replaced by the closely similar A. digitula in southwestern Washington and western Oregon. Apamea sordens is limited to the eastern Blue Mountains in Oregon, and has not been collected in the dry portions of southeastern Oregon or in adjacent Idaho.

Apamea sordens is a holarctic species widely distributed through North America, Europe, and Asia. In North America it occurs across southern Canada and the adjacent United States in the boreal zone, ranging as far north as north-central Alberta and Labrador. The range extends south in the mountains to North Carolina in the East and southern New Mexico in the West. Apamea sordens is replaced by the very similar A. digitula on most of the West Coast.

This species is a climbing cutworm that feeds on many types of grasses (Poaceae), including many cultivated grain crops.

Adults of A. sordens fly most commonly from early May through July, rarely later in the summer. They are nocturnal and come to lights.

This species has been known to cause serious economic damage to various agricultural grain crops such as wheat, rye, and corn.