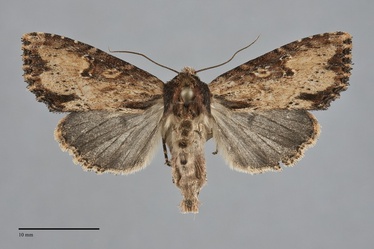 Apamea vultuosa is a medium-sized Apamea (FW length 17–19 mm) that is found along the West Coast and in southern British Columbia in our area. It has yellow-brown forewings with triangular dark marks along the outer margin, although an entirely dark brown form exists. The forewing is usually even dull yellow-brown with mottled warm brown along the costa, between the two spots in the cell, and at the trailing margin near the wing base. The terminal area is darker gray-brown, separated into two distinct triangular marks where the subterminal line reaches the margin on the mid-wing. These marks extend into the subterminal area although the demarcation between the terminal and subterminal areas is poor. Uncommon darker mottled brown forms have less contrasting darker areas in the same distribution. A faint basal dash is present. The transverse lines are evident as paired spots on the costa and as series of paired dark dots on the veins along the course of the postmedial line. The orbicular spot is brown, elongate, filled with the ground color and a central horizontal brown streak. The reniform spots is outlined in dark outer and ground color to white inner components and is filled with brown centrally and gray inferiorly. The claviform spot is variable, brown or absent. The hindwing is brown-gray with gray central and marginal shading, darker gray discal spot and veins. The hindwing fringe is lighter, often pinkish, with a darker gray base. The head and base of the collar are light brown. The remainder of the thorax, including the rest of the collar, are dark brown. The male antenna is filiform.

Apamea vultuosa can be identified by the combination of light yellow-brown forewing with two triangular dark brown marks along the outer margin, near absence of transverse lines, and a contrasting dark thorax.

The populations of this species are arranged in two subspecies by Lafontaine (2009). The nominate subspecies occurs east of the Cascade Mountains, ranging to the Atlantic Coast. Subspecies A. v. multicolor occurs on the Pacific Coast from Vancouver Island south. It is darker than the nominate subspecies and is more likely to have a white inner line to the reniform spot.

Hadena multicolor Dyar, now considered a subspecies of A. vultuosa, was described from Victoria, British Columbia.

Apamea vultuosa is found most commonly west of the Cascade Range in the Pacific Northwest. It occurs from the latitude of the Alaska Panhandle south to southern Oregon in this part of its range. It is less commonly encountered east of the Cascades, with scattered records from southern British Columbia and the Blue Mountains of Oregon.

This species occurs across southern Canada to the mouth of the St. Lawrence River and the island of Newfoundland. It is found in the adjacent Great Lakes States, New England, and New York. The range extends south to North Carolina and northern Alabama in the East, to Colorado in the Rocky Mountains, and to southern California along the West Coast. There are very few records from near the southern limit of the range (Lafontaine 2009).

Adults are single brooded and fly in late spring and early summer. The records for the Pacific Northwest range from mid-May to mid-July. It is nocturnal and comes to lights.